My oldest has started recording Minecraft videos. If you’re not familiar with the concept, this means he records himself playing the game for awhile, then puts the video on YouTube for the world to watch. I had no idea there was such a demand for videos of blocky graphics with a soundtrack of a pre-teen boy saying, “So…yeah,” every two and a half minutes.

He’s very excited about it, to the point that every other word out of his mouth is “record,” and every plan he relates to me of his future—ten minutes from now or ten years from now—includes a provision for “recording.”

During these conversations, I’m reminded of the wife of a former coworker, who almost got herself strangled for a similar transgression. I’m willing to put up with this  behavior in my kid, but in a relative stranger it was unforgivably aggravating.

Her husband and I were on a business trip together, and since he was staying for two weeks, she joined him for the second one. Our time overlapped by only one day, but it was a very long day.

We collected her at the airport, and on the drive to the hotel (approximately 30 minutes) she proved herself to be amazing: competent, efficient, and skilled. I know because she told me. Six times.

She was also apparently a horseback rider, and we were near an area that’s famous for its horses. She was planning to hit up a nearby stable and do a little riding. I know this because she told me. Fourteen thousand times.

“I was thinking of doing a little sightseeing. If I’m not riding, that is.”

“I’ll probably go shopping for presents for the kids on Thursday, unless I’m riding, of course.”

“I’m thinking of riding on Tuesday, so that might not be the best night to go out for a fancy dinner.”

But the best thing, the thing that made me want to shove her under a train, was that night when we went out to dinner.

There was an area where lots of restaurants were clustered together, so we went there. She assured me that she was not at all particular, and anything would do. We examined the first menu board. Her husband and I both said it looked fine. She pursed her lips.

“I don’t know…there’s not really anything here that strikes me…” We walked away to check out another restaurant while she breezily declared, “But you know, I’m easy—I’ll eat anything.”

“Well…I’m not really in the mood for Mexican.” Off we went.

“But I don’t care—anything is fine with me. I’m not a picky eater.”

Oh yeah? From what I can tell you’re actually what picky eating would be if picky eating were given human form and a superior attitude. But whatever.

Finally, on the recommendation of the maître’ d of another restaurant (Him: “What kind of food were you hoping for?” Her: “Oh, I’m not particular—I eat everything.” I rolled my eyes so hard it took 15 minutes to get them back in place after that exchange), we found someplace she would deign to sample. They served seafood. We ordered and our meals arrived. Because I was raised with manners, I asked how her entrée was. I didn’t actually care.

“Oh, well, you know, it’s okay, but this is a citrus sauce, and I sort of prefer a cream sauce.”

It took every ounce of self-control I had not to lose my shit. I wanted to say, “Then why did you not read the fucking menu, where it said that the dish you ordered was served with a citrus sauce and not a cream sauce, you self-involved, conceited, irritating twatwaffle?

You will understand when I say I was not disappointed in the least when she declared she was too tired for any further socializing after dinner. No chance for us to become lifelong friends? Darn.

Have you ever wanted to shove someone under a train? Have you ever had someone who was clearly an exceptionally picky declare that they were not? Do you prefer cream sauce, or citrus sauce? 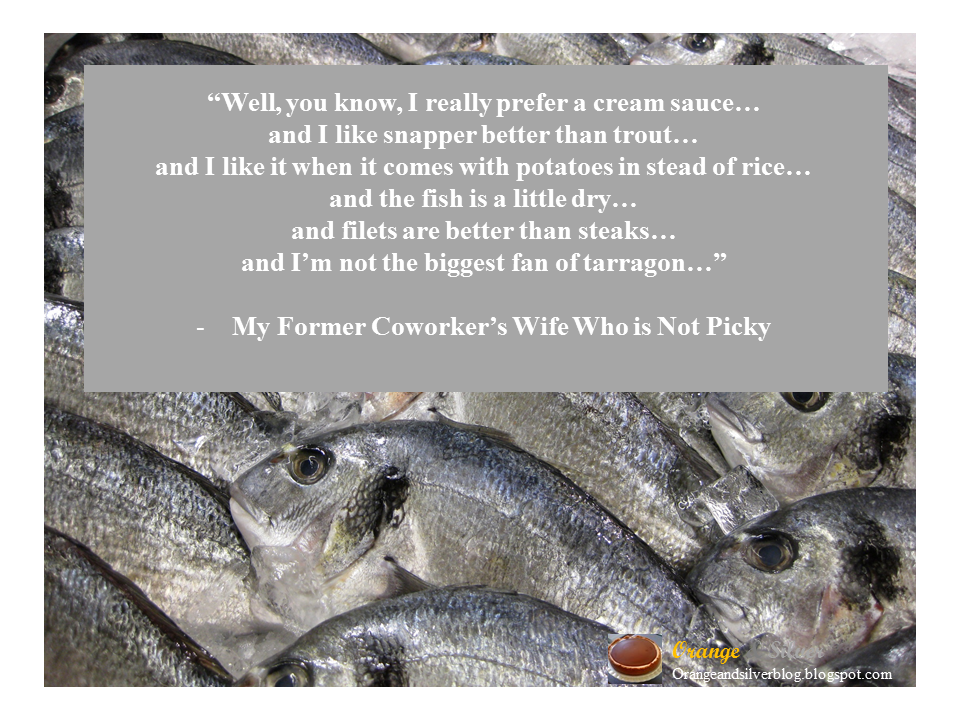 Email ThisBlogThis!Share to TwitterShare to FacebookShare to Pinterest
Labels: idiots abound, irritating people, things that piss me off, why must I be surrounded by idiots, you're kidding right

After the day I had...yeah, I've got a whole list of people that I would gladly shove under a train.

This happened at least twelve years ago, and she's STILL on my list :)

Yup. I would agree with Gigi in that it would be a shorter list to write who I wouldn't shove under a train today. However, anyone who messes with my food and when I can eat--if they're "not picky"--would be first on my list.

That would drive me absolutely insane. Don't know if I would be physically capable of keeping my mouth shut.

More importantly, what is it about boys and "So.... yeah"? My son says the exact same thing about every 7 minutes. I don't remember anyone saying that when I was a kid. Also, my son's favorite activity is watching Minecraft videos. He likes it more than playing the damn game. WTF?

The delay of my evening repast was a huge part of why I'm clearly still bitter 14 years later.

Cassandra - it's a good thing it wasn't more than a day, because otherwise it wouldn't have been possible for me to endure it in silence.

As for the videos, I have a more tolerant view of them after talking to some of my coworkers (computer engineers, almost all gamers themselves) who pointed out that there really aren't written guides (well, ok there are but it's hard to explain a video game in writing) for how to play these games, so the videos show them how to, tricks, etc. I still don't like being bugged to watch them constantly, and they're eternally long (seriously? An hour +?) but I at least "get" them to an extent now so...yeah.

(So...yeah is relatively new--kind of like "I know? Right?" which we also never said as kids.)

Oh, I must find a way to incorporate the word twatwaffle in my next conversation. It's awesome.

And both my kids watch Minecraft videos on youtube and have big plans to become millionaires recording themselves doing the same. I'd be wigged out by other people watching them play games, but I would love it if they could pay for their own college.

"Twatwaffle" is, without question, one of my favorite words ever.

I think my son is more interested in fame than fortune. He's obsessed about views and followers. Which isn't to say he's not into the financial side of it--he's going to start his own server and make a bundle. Yeah, sure.

I let him do the videos, but I have a strict rule that under no circumstances may any video that includes anyone saying any of my kids' names be posted on the internet. If he says his sister's name, or one of his brothers calls him and you can hear it on the recording, it doesn't go on YouTube, PERIOD.

I'm not holding my breath that Minecraft will be my financial salvation. But it's funny to know that other kids have the same delusion :)

I felt my blood pressure rise in sympathy as I read this. Former coworker in every discussion we had about work: "Weeeeeelllll.." followed by all the reasons her idea was better.

It wasn't. I changed jobs.

Sounds like you may have worked with this woman, because I can assure you that I heard about how outstanding all her ideas were on the way from the airport to the hotel!

"The reason they keep me is because I do the job the best, of course." I swear that's a direct quote!

I let the world know well in advance about my food intolerances. I do a lot of legwork to come up with a list of "safe" places where I can eat (trust me when I say this is not by choice, it's a crappy necessity in my life). I've actually had what I'll call the opposite happen to me. I'll have drafted up a whole list of restaurants only to have others want to try somewhere else and then they get disappointed when it's discovered (!) I can't safely eat there. But anyhoo, I loudly tell friends and restaurant staff that I am high maintenance. I'm upfront about it and try hard not to be a twatwaffle! :-)

I have a lot more tolerance for physically can't eat it than I do for "eh, I'm just not in the MOOD--but you know, I'll eat anything!" The former is not a person's choice, and I totally get that. The latter is what make someone a twatwaffle :)

Except now people WANT to watch these dumb videos. I know TONS of people with tween (mostly) boys who LOVE them.

It's been explained to me (by gainfully employed otherwise rational adults who happen to be gamers) that it's the way people figure out how play these games. Because they don't have manuals (well, they do now, but whatever) or anything that explain how to play or get to the next level or whatever. Of course, I don't recall that Pac Man came with anything like that, and WE figured it out, so it seems like kind of a lame rationalization to me, but whatever!

Ugh, I bet if you shoved her under a train she'd critique the train, the tracks, and the manner of your shoving. I don't know how you kept quiet.

And she'd have pointed out that she TOTALLY could have done it better.

I don't either--I suspect it was because I really only spent about a sum total of 4 hours in her presence, and her husband really was a nice guy, so I didn't want to make things hard for him.

I loved you before, but now that I know that you have to resist the urge to shove someone under a train, I know I have found a soulmate.

Oh god yes. If I kept a running list of every idiot I wanted to shove under a train, I'd be going to Hell faster than I already am. Because I am going to Hell, no question about it! :)

Save me a seat. We can party together.

Done! I have a short list for "save a seat" peeps. You're totally on it--you were before this. :)

I love it. Good thing she wasn't picky.