Some Whining and an Annoucement

I’ve been kind of quiet for the past couple of weeks. Sorry about that. My husband won us a trip to Las Vegas by selling the hell out of the world’s most boring product (sales tax software—it’s not just software, which itself is a total snoozefest, but it calculates sales takjfadf;kjsdfsj  see? I nodded off just telling you about it). We came home from that trip to turn around four days later and fly to New Hampshire to clean out my father in law’s house.

This was even less fun than it sounds, because on the last day—the Last. Damned. Day.—we got a call from the shipping company telling us they wouldn’t be able to pick up our shipment until the next afternoon. That was a deal breaker, because the house had to be empty for a walkthrough Friday morning. Shipper number two could come get it that day, but they wanted SEVEN THOUSAND DOLLARS because the pallets weren’t standard size and couldn’t have anything stacked on top of them. They wanted us to pay for the cubic space above each of them in the truck as well as the weight we were shipping. Apparently air in trucks is much more valuable than regular air, and this air was going to cost us seven thousand dollars.

As my husband dashed out to buy packing cartons so we could pack up a bunch of this crap and UPS it (plan B), my kids asked if they could play in the basement. I’m not sure if I’m glad I let them or not, because they walked down there and found Lake fucking Michigan on the floor. As I attempted to mop it up, I realized water was still flowing but couldn’t figure out from where.

While I was on the phone with the plumber, one of my kids came over, tugged my arm, and pointed to a leak in the kitchen ceiling. Of course. An ice dam.

This story does have a happy ending (two, in fact): the basement water problem turned out to be the hose bib which was repaired the next morning, the buyers bought the house even with the ice dam problem, and we were able to get everything to the UPS store to ship by the time it closed. I did come home with a desire to rid myself of every material thing I own, leaving us with a coat hanger and three salad forks as our sole possessions. I'm sure this will pass, but right now the urge to get rid of it all is pretty overwhelming. Still, if it prevents one unnecessary purchase, it won't be a bad thing.

The OTHER happy ending is that I get to tell you about a very exciting thing that’s happened to me. You may have heard about the anthology that Jen Mann over at People I Want to Punch in the Throat is putting together (it's all over social media). It’s a follow up to her earlier awesome and successful anthology called “I Just Want to Pee Alone” and it’s called (you’ll never guess) “I STILL Just Want to Pee Alone.” You’ve probably already figured out by now that I am IN this book. Yes! Me! Along with a shit ton of other super funny and fabulous bloggers. I've spent the last few weeks virtually pinching myself because I'm so thrilled to be included.

Today I get to show you what the cover is going to look like! Ready? 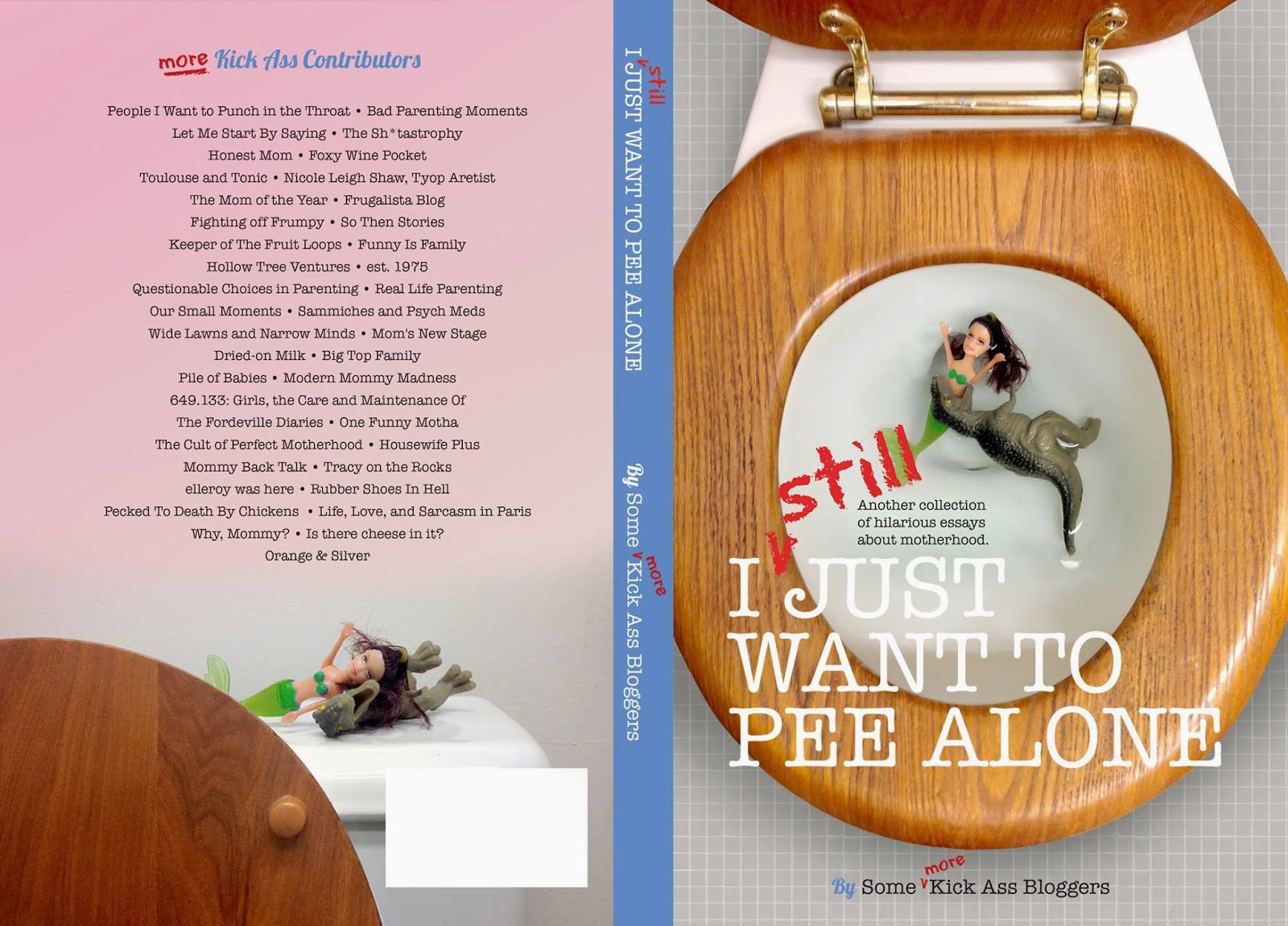 Jen Mann of People I Want to Punch in the Throat
Bethany Kriger Thies of Bad Parenting Moments
Kim Bongiorno of Let Me Start By Saying
Alyson Herzig of The Shitastrophy
JD Bailey of Honest Mom
Kathryn Leehane of Foxy Wine Pocket
Suzanne Fleet of Toulouse and Tonic
Nicole Leigh Shaw of Nicole Leigh Shaw, Tyop Aretist
Meredith Spidel of The Mom of the Year
Rebecca Gallagher of Frugalista Blog
Rita Templeton of Fighting off Frumpy
Darcy Perdu of So Then Stories
Christine Burke of Keeper of The Fruit Loops
Amy Flory of Funny Is Family
Robyn Welling of Hollow Tree Ventures
Sarah del Rio of est. 1975
Amanda Mushro of Questionable Choices in Parenting
Jennifer Hicks of Real Life Parenting
Courtney Fitzgerald of Our Small Moments
Lola Lolita of Sammiches and Psych Meds
Victoria Fedden of Wide Lawns and Narrow Minds
Keesha Beckford of Mom's New Stage
Stacia Ellermeier of Dried-on Milk
Ashley Allen of Big Top Family
Meredith Bland of Pile of Babies
Harmony Hobbs of Modern Mommy Madness
Janel Mills of 649.133: Girls, the Care and Maintenance Of
Kim Forde of The Fordeville Diaries
Stacey Gill of One Funny Motha
Beth Caldwell of The Cult of Perfect Motherhood
Sarah Cottrell of Housewife Plus
Michelle Back of Mommy Back Talk
Tracy Sano of Tracy on the Rocks
Linda Roy of elleroy was here
Michelle Poston Combs of Rubber Shoes In Hell
Susan Lee Maccarelli of Pecked To Death By Chickens
Vicki Lesage of Life, Love, and Sarcasm in Paris
Kris Amels of Why, Mommy?
Mackenzie Cheeseman of Is there cheese in it?

oh man...that was a roller coaster! I'm glad it all worked out in the end.

And so EXCITED about the book. So glad we get to share this!

Congratulations on the anthology, I bet that'll be keeping you busy for the next few months!

Michelle - Total pain in the ass, but it's pretty much the legacy I was expecting. :p And yes! Super excited about the book--yay, us!

Somerset Wedding Gal - Thanks! Yes, indeed--lots to do!

So excited to be sharing the pages of this book with all of you hilarious ladies. We did it!