BlogU: An Ode to Skippy

Except for one thing.

I killed a squirrel.

Everyone says it’s not my fault, and I know they’re right, but Skippy’s death still weighs on me. (He was a squirrel--of course his name wasn't really Skippy. I just decided it was an OK squirrel name, and since I killed him, I owe it to him to at least give him an identity beyond just “that squirrel I killed.”)

This is what happened: I had dropped a couple of friends off at the dining hall (I don’t think I clarified that BlogU is held on a college campus with the attendees having the option to stay in the dorms; meals are served in the dining hall), and was going to get myself a bottle of water. I was driving along the road back out of campus at a measured pace—there was nothing reckless or imprudent in my speed. As I passed under a large oak tree, I heard a horrible, loud WHUMP on the roof of my rental car. I slammed on the breaks, and just as I was wondering, "...the fuck...??" what looked like a fur-covered burrito rolled down my windshield and off the hood of the car.

I threw the car in park and jumped out. There on the pavement lay Skippy. The worst thing was he was still twitching. He wasn’t dead, but in another five minutes he was going to be. That squirrel was a goner. I covered my mouth in horror and stared at him. Two other conference attendees passing on the sidewalk stopped and stared with me. They told me there were actually two squirrels up in the tree, and they’d heard them chattering, and seen them chasing each other. I started to wonder if this really was an accident. It was starting to look like maybe Humpty Dumpty was pushed, if you know what I mean.

The thing is, wildlife would do well to steer clear of me. There seems to be a trend in negative survival outcome with undomesticated creatures that fate casts into my path. Cats and dogs do fine, but squirrels and birds not so much.

The first time this happened I was about nine. We found a baby bird, and did the whole shoe box house-cotton ball bed thing. I don’t remember what we fed it, nor how long it took to get to a point where we could release it, but the day surely came. A deceptively beautiful early summer day, a day which doubtless this innocent creature in no way suspected would be his last.

I’d been told I could release him. I took the box with the bird outside and sat down on the bench on the front porch. The sky was a perfect cloudless blue, a slight breeze whispering through the trees. I spent a minute just savoring the moment. (I was kind of a weird kid. I know. Shocker.) I opened the box, and the bird hopped up to edge of the box, then down onto the bench next to me. I could practically see him take a deep breath before spreading his wings and soaring off to land in the grass of my neighbor’s front lawn.

At which point our cat lunged out from under a juniper bush and killed him, because I’d forgotten to make sure she was inside before I set the bird free.

There followed a few more birds and a baby squirrel named Davey who didn't make it, and bunch of box turtles who, to be fair, did not perish in my care and were actually saved from fairly horrible deaths to be set free in our back yard, although not before peeing all over the floor of my mother’s car. I don’t get it—every damned one. We’d pull over, pluck the thing from almost certain annihilation under the wheel of some other car, and put it on the floor of the passenger side, where it would show its gratitude by instantly peeing all over the floorboard in terror. Or something. Assholes. Fortunately we didn’t have carpet floor mats.

Since this whole thing makes me sound like a really horrible wildlife ambassador and possibly some distant cousin of Josef Mengele, I’ll leave you with a happy story about me and an animal I rescued.

One evening when I was about 24, I was watching TV with my dad. We heard a sort of scratching noise at the metal screen door of the house. My dad was passing the front door when we heard it, so he opened it and almost immediately slammed it shut again.

Not beyond the realm of possibility, because at one point there was a skunk living under our front porch, but there was something wrong with the idea of a skunk scratching at the door. I opened the door slowly and looked out. What I saw on the porch was not a skunk, but a ferret. At the time I worked for a veterinarian, so I had some familiarity with them. I brought it in the house, gave it some of the cat’s food, and let it spend the night in the garage with a litter pan. We put up signs, but after two days there was no response to them. I didn’t want a ferret (they’re a weasel—they have a funny musky scent to them) so I took it to the vet’s office and one of the staffers adopted it.

So there, you see? I didn’t kill every wild thing that was placed in my hands by the universe.

Except now that I think about it, ferrets are considered domesticated animals. Poop. 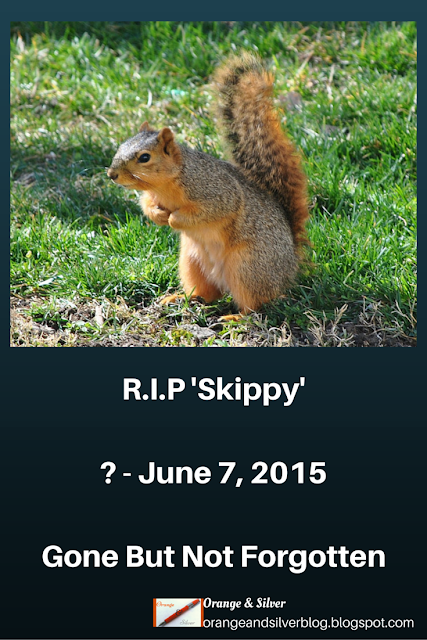 Oh Skippy. Just one of the many shared awkward experiences at BlogU. I can't wait for next year. Is that weird?

Not weird at all! I'm not sure the squirrels on the Notre Dame campus necessarily share your enthusiasm, but I do!

Do I remember correctly that you once had a swimming pool? And that chipmunks would lean so far over the side to get a drink of water that they would fall in and drown? If I read this story on your blog you truly are a menace to wild critters! If it was someone else's blog, this must seem like a very strange comment.

I don't think Skippy was pushed. I think he committed suicide. The other squirrel in the tree had just told him that she was leaving him for another squirrel and he no longer saw a reason to live. Along came your car...and the rest in history. It truly wasn't your fault.

You're right, Margot--that was me and those blotto chipmunks were in my yard and that's just one MORE reason why wild animals should be wary in my presence.

Actually, that could be because people later said they saw another squirrel nuzzling it and now it makes sense--his wife realized too late that she regretted her actions and was filled with remorse when she saw him lying there.

If I were a wild animal, I would definitely steer clear.

He does sound like a charmer. Ick. If I thought I could live with the guilt, I might take you up on it, but I accidentally killed Skippy and I felt horrible about it for days. If it was intentional, I'm not sure I could handle it, even if he was a gross perv. :)

I will keep Skippy in my head any time I'm driving down Northern Parkway past Notre Dame. <3 I'm glad you came to BlogU and had a great time despite this experience!

Yes, say a little prayer for Skippy when you go past for me! It was a wonderful time. Although I'm not sure Skippy would agree...

OMG Evil Joy and I were walking to breakfast on Sunday and saw his fresh corpse. It was obvious to us that he must've been feeling very depressed and decided to jump outta the tree, because no car on campus could've possibly been going fast enough to run him over. On the way back from breakfast, that damn squirrel was facing the opposite way. When we walked back to the closing, he was gone. We figured he was a 'walker' from The Walking Dead and had gone in search of fresh squirrel brains.

Skippy got whacked, yo. You were framed! RIP Skippy.

Linda, I am laughing SO hard right now!

By using RentalCars you can discover affordable rental cars from over 49000 international locations.