Possibly the Worst Gift I Ever Gave My Grandmother

Yesterday my grandmother turned 102 years old. She’s in pretty good shape for 102. She lives in an efficiency apartment in an independent living facility. She doesn’t use a walker, although she has conceded to a cane to steady her. She’s not on oxygen, and she takes no medications whatsoever. She even still worries about getting fat. She says my husband makes the best Toll House cookies she’s ever had, so periodically I take her a box as a gift (because what else am I going to get someone who’s that old? It’s not like she needs anything) and she eats a couple, then freezes the rest to have when people come to visit her. My friends and I all agree that if we make it to 102, we are going to eat all the cookies.

As it happens, I have a friend with very outspoken opinions on grandparent names. She says (and I think she’s quoting some comedian) you hear perfectly rational adults say things like, “Well, I’m off to the airport to pick up MeeMaw and PeePaw,” and they just sound like idiots. We don’t call my grandmother MeeMaw (nor was her husband PeePaw), but we do have a sort of unfortunate nickname for her. And I gave it to her.

I was the first grandchild, and when I learned to talk there was great concern as to what she and my grandfather would be called. I don’t mean to imply that she worried about it on a level with the Cold War or anything, but she was determined that her “grandmother name” would be something sensible. Why we didn’t just go with “Grandma” or “Granny” has never been explained, except maybe she didn’t like either of those options (I’ve never thought to ask her—I suppose I could; I did just say she’s still alive and pretty sharp mentally), possibly she didn't feel old enough to be a grandmother--she was only about 57 at the time, or maybe she was worried that a two year old would bastardize it and she’d end up as Gamgam or something equally abhorrent (since clearly that’s what happened in the case of Cousin Lucy).

My mother’s brother and sister were in college at this time, and still living at home. My grandmother’s real name is Eleanor, and my aunt and uncle used to call her Elsie as a joke, because of Elsie the Cow--my grandparents had a farm and raised beef cattle. My aunt suggested Elsie might be a good “grandmother name” because it was, after all, a real name

“Oh, well, that’s all right with me. Tracy can call me Elsie,” she said.

Except, of course, I was unable to say Elsie, and what came out was “Ahtee.”  (Pronounced just like it’s spelled "ah" like you're having your throat checked + tee, and which spell check always wants me to change to “hate” which I think is pretty unkind of it, and a bit rude when it doesn’t even know my grandmother.) There’s a four year gap between me and my next youngest cousin, and by the time she came along, Ahtee was pretty well entrenched. My cousin’s brother is ten years younger than she is, so of course there was no turning back by then. Ahtee she is to this day, and with the exception of her actual children, everyone in our family calls her Ahtee.

At one point when I was a teenager, I got kind of embarrassed by the whole Ahtee thing (as teenagers do, convinced that everyone around me was judging me for this stupid nickname I was calling my grandmother in the grocery store, when in fact they probably called their own grandmother something equally as silly, or possibly even worse) and tried to call her Elsie, as had been intended all those years ago. It was, of course, a complete failure, and I was never able to retrain myself. Even if I had been, I’m not sure she would have been able to adjust to answering to it. And so Ahtee she is, and Ahtee she will be, forever and ever. I mentioned to her once that I wasn’t so sure she really came out that much better than Cousin Lucy, and she agreed, but I think after almost 50 years she’s made peace with it.

Do your grandparents have regrettable nicknames? Are you responsible for them? 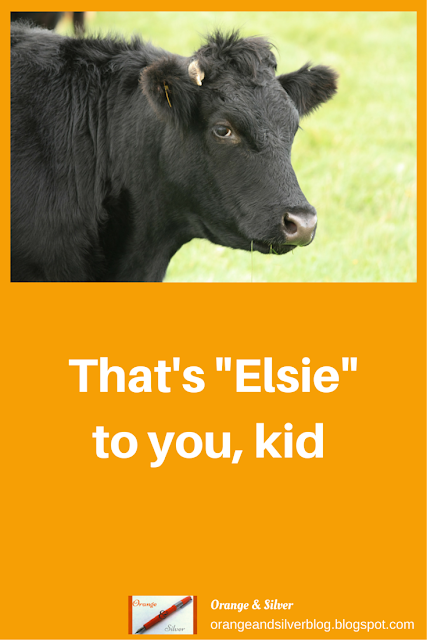 Email ThisBlogThis!Share to TwitterShare to FacebookShare to Pinterest
Labels: life stories, stories about my grandmother

All of the grandchildren call my dad "Da". I always called him Da and when my daughter (the oldest grandchild) was three, one day my dad was late for something and I was yelling "Da! Come on, it's time to go". And she started yelling "Da"! And Da it's been ever since. People sometimes look at us funny in public when the 8 year old grandson addresses him as Da (he's 82 now). But otherwise, he's good with it.

That's not bad--I can see how he'd get some strange looks, but lord knows it could be worse. My grandfather (Ahtee's husband) was "Gramps." Also not bad, IMO.

Ha! My grandparents were "Grandmother and Pop." I always felt a little odd talking about him with other people like "Yeah, my Pop built a whatever." But now I'm like... what a badass. Pop was totally a badass. And a badass name. I think I'll have my grandchildren call me Pop. Gender be damned.

You should totally do that. In fact, I think I'M going to start calling you Pop. Because you're pretty badass yourself. Now I know where you get it ;)