Summers are supposed to be relaxing. They probably are for my kids, who don’t have to go to school, but I still have a full time job, so not only do I have to figure out how to amuse my kids, I also have to work. That’s not to say I don’t relax in the summer. I do. I relax my standards.

From the time school lets out to Labor Day, my standards go downhill faster than the Jamaican bobsled team. We say farewell to nutritionally balanced breakfasts and lunches. By the end of the summer my children are subsisting on whatever they can scavenge from the pantry and refrigerator. Their meals sound like an episode of “Chopped.” Our normally rigorous schedule of bathing and sleeping has gone mostly out the window (bedtime gets a little more attention because by the end of the day I’m ready for them to enter a state in which they are unable to talk to me for twenty minutes at a time about Minecraft or Boom Beach). My once-reasonably-neat home bears close resemblance to a condemned building, and probably isn’t far from actually being condemned, if anyone were to call the City and report our squalid conditions.

To illustrate the contrast, I offer the following examples:

Last Week of School: “You need to eat something real for breakfast even if it's just a Nutrigrain bar.”
Last Week of July: “There are some Tostitos in the pantry if you decide you want breakfast.”

Last Week of School: “Showers on Saturday, Sunday, Tuesday, and Thursday. No exceptions.”
Last Week of July: “I think you need a shower. Wait, you went in the pool three days ago? Eh, that counts.”

Last Week of School: “You need to have a vegetable with that.”
Last Week of July: “Sure, lemonade counts as fruit.”

Last Week of School: “Thirty minutes of computer time, ONLY.”
Last Week of July: “Just be sure you stop and go to the bathroom now and then. I don’t want to have to treat you for a UTI.”

Last Week of School: “Twenty minutes of reading every day.”
Last Week of July: “Sure, reading the ingredients on the yogurt cup counts as reading.”

Last Week of School: “Time to do your chores; here are your chore lists.”
Last Week of July: “I guess we can go another day without vacuuming. That biggest wad of hair is the dog, right?”

Last Week of School: “The television doesn’t go on until 6 p.m.”
Last Week of July: “Whatever. I don’t care. Yeah, you can watch television.”

As you can see, I grow lax and careless as time goes by. I’ll rein them back in when we get closer to school starting, and my rules and routines will be fully back in force by September, when they’ll need the structure to get them out the door on time, and get homework done. But in the meantime, things are pretty laid back, and that’s really what summer is all about. Now if my boss’s standards would just lower to meet mine we’d be all set. 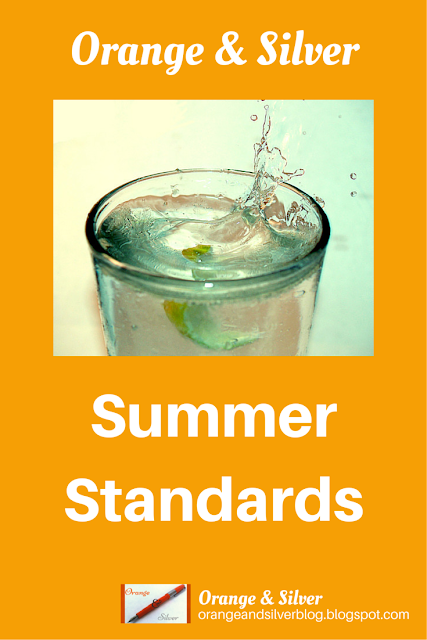 Email ThisBlogThis!Share to TwitterShare to FacebookShare to Pinterest
Labels: back to school, I hate video games, school and other torture, summer

I can totally relate. We call it "pool" clean. Our youngest started staying up much later than he should. I swear I think I heard him pouring cereal about midnight last night. Cereal is a popular staple in our house and will get eaten pretty much for any meal/snack. And it's been non-stop stupid kid shows on the tv. I work outside the home so at least I don't have to watch this big sloth fest everyday. :-)

This sounds like what goes on at my house and I work from home. lol. Summer = Breakfast Tostitos!

kdcol - We have a not-nanny (so called because my children shrieked that they were TOO OLD FOR A NANNY when I called her that), so she's the lucky contestant who deals with the Tostitos and dog-sized wads of fur. I too relieve myself of their slovenly presence by escaping to my office.

Linda - I think anyone who says their kids don't eat Fritos and saltines for breakfast in the summer is lying. Or has a live-in cook.