I wrote this post a couple of years ago. School starts in ten days, and while I don't mind the nice weather, I'm kind of over the whole lack of structure summer thing, to the point that I can't even force myself to be productive. So like the television networks, here's a rerun for you until I can get my act together sufficiently to come up with some new material.


A couple of weeks ago, I was reading a blog entry, the subject of which was, “I always thought…” (people said things like, I thought talk about euthanasia was about youth in Asia, or I thought Kosher pickles had no pork in them, that sort of thing). In the comments, people added hundreds and hundreds of further things that they misunderstood, in some cases for years. A lot of people thought Roy Orbison was blind because he always wears those sunglasses.

One of them was this:


“I thought the Moody Blues song was “Knights In White Satin”. I couldn’t understand why the knights wore white satin & not armor.”
And I confess that all these years I too had thought that song was about actual guys jousting and wooing ladies faire, not the part of the day when it’s not light outside. I mean, read the words—they really could be about anything:


“Nights (or, if you’re me, Knights) in white satin, never reaching the end,
Letters I've written, never meaning to send.
Beauty I'd always missed with these eyes before.
Just what the truth is, I can't say anymore.

Etc. (Sure, there are two more verses, but one is exactly the same as the one above, and the other is just some philosophical bullshit about figuring out who you want to be. Or something. I confess I don’t really know, but since I spent the better part of thirty years thinking that the song was actually about guys who had been recognized by some king or other for their outstanding behavior, I’m not sure I’m the best candidate to analyze the lyrics.)
I mean, seriously all you’ve got there is a generic love song. And the “Late Lament” (the spoken bit at the end) doesn’t really add a clarifying element. It’s just there.


But when I posted about this on Facebook, several people thought I was nuts. Mostly guys who were old enough to remember when the song was a hit. One friend pointed out that the album has a very specific theme that, had I listened to the whole thing, would have made such an error impossible. But I had this specific set of images that went through my head when I heard the song, and the news that they were completely wrong just took the wind out of my sails.
I decided to share this amazing news with someone who I was sure would get it. I went in to talk to my boss. She’s about the same age I am, grew up in the same general area of the country, and has a lot of the same cultural background that I do.


I said, “So, I was reading this blog entry about things you misunderstood. And there was this one that said, ‘I always thought the Moody Blues song was, ‘Knights in White Satin’ like actual guys in armor but apparently it’s ‘night’ as in not daytime…’” And as I’m saying this out loud to her, I can see the same look crossing her face that crossed mine when I read it the first time.
It was the look that said, “You mean…it’s not?”


For almost the same length of time, she too had always had an image of guys in white satin suits cruising around doing chivalrous things. So it was nice to know I wasn’t alone. And really, I was even less alone than I’d originally thought, even taking into account my manager’s company in this age-old misconception. It turns out that in the comments section of this entry, there were dozens and dozens and dozens of people who had always thought the same thing.
And the truth about this song that caused me so much angst? Yeah, I actually don’t like it very much. It’s a very irritating and persistent ear worm for me. Even as I write this, I am tortured by it running through my head. And it will be with me for days now, dammit. But on the plus side, I did know Roy Orbison wasn’t blind. 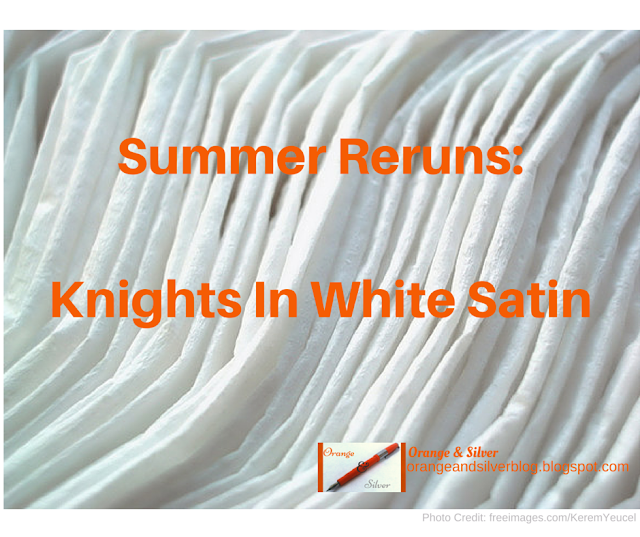 You are in excellent company--I'm telling you, I think 30% of the comments on that blog (and it was the Bloggess, so you know there were a LOT of comments) said the same thing. Another 20% thought Roy Orbison was blind, and the rest were random other things. There are TONS of people who think it's about knights, because it's such a random collection of lyrics.

You are so my people. 17,280minutes until my son starts school. Counting every one of them.

Wow, okay for the longest time (okay until just now when I looked it up), I thought The Sounds of Silence said something about horses never shedding, oh and when I was a little girl I thought shedding was a bad word for whatever reason. It was THIS line I've had wrong pretty much my entire life --- ...People writing songs that voices never share... It's VOICES, not horses. I'm such a dumb ass. :-)

kdcol that's so funny! I can hear why you'd think it was "horses" and not "voices." On the subject of thinking shedding was a bad word, when I was a kid I thought "towed and owner's expense" meant that if you were towed, you got to name the price you'd pay the towing company to get your car back--like if you were only willing to give them a dollar, that's what they had to take.