N.B. It was brought to my attention that if this recipe is made with regular salt, it is WAY too salty. I always use kosher salt. Don't use table salt or this will be truly inedible. My apologies to anyone who may have tried it already without that caveat!

Here it is at last. I’ve been trying to get a picture of a single slice of this for months. And you know what happens? That’s right—every time I’m ready to photograph it, I look for the slice I saved as my “model” and it’s gone. Someone has eaten my model. So you’re just going to have to content yourself with the picture of the whole cheesecake that I happen to have snapped once with my camera phone. It doesn’t really do it justice, but you get the idea.
I made this for Thanksgiving in 2010. It was proclaimed, “The best dessert you’ve ever made.” Praise, indeed. Well, actually, considering all the desserts I’ve made in 15 years of marriage, plus probably 3 years of dating, that could be saying quite a bit. In the event, I was asked to make it again for Christmas. And again for my husband’s birthday. And again for our anniversary. And every time I made it, I would post about it on Facebook, and my friends would say how much they wanted a piece. Finally, in August of 2012, I made a cheesecake, and invited all my friends over for a Friday night Happy Hour and Cheesecake Devouring Event.
I could have taken numerous pictures of my friends eating it, but when the dust settled, once again, I was left with no model. In fact, I didn’t even get a piece. So the next day, I made another Salted Caramel Cheesecake. I took it to a birthday party for a friend, where once again it was completely consumed, and while I didn’t have anything left to take a picture of, at least I got a slice of it this time.
So, rather than make you wait until November for this recipe, when I might actually be able to get a decent picture of it, I’m giving it to you now and you can make it for Thanksgiving and Christmas and your husband’s birthday and your anniversary. I hope it’s the best dessert you’ll ever make.

Serves 2
Ha ha! Just kidding—I’ve served up to 20 people with one cheesecake. Ideally it probably serves about 10-12 people.

About 15 graham crackers
3 tablespoons granulated sugar
1 stick unsalted butter, melted
1 1/4 teaspoons kosher salt (note: I reduced this from 2 teaspoons. A number of folks in the comments said they found it was too salty. I made this recipe 4 times before posting this, and checked the measurements pretty carefully, I thought. However, I made it for Thanksgiving 2011 and realized that they WAY the crust is distributed in the pan can make it seem quite salty--if there's a significant slope between the bottom and the sides, that fairly dense piece of crust can be overpowering to the rest of the recipe. So I'm recommending the reduction to the salt to account for the possible variations in the way people make the crust.)
1. Preheat oven to 375 degrees F. In a food processor, grind graham crackers to crumbs. (If you’re using premade crumbs, you want about 8 oz or 2 cups, and you’ll want to do all these steps in a bowl.) Add sugar and salt and pulse to combine. With motor running, add butter through feed tube. Process for another few seconds until combined.
2. Transfer the mixture to a 9” or 10” (I have a 10” myself) springform pan sprayed with cooking spray. Pat crumb mixture into the bottom of the pan, and up the sides about 2”. Don’t worry if it’s not perfectly even around the top; you just want to be sure it’s deep enough to hold all the cheesecake mixture.
3. Bake crust until slightly brown. You’ll just be able to smell it. This will take anywhere from 10-12 minutes. Remove crust from the oven and allow to cool on a rack. Reduce oven temperature to 300 degrees F.
For the cheesecake

1. In a stand mixture fitted with the paddle attachment beat cream cheese until smooth, add dulce de leche and beat to combine.
2. Add flour and salt, beat to combine, stopping to scrape down the sides as necessary. Beat until smooth and fluffy, about 5 minutes. There should be no lumps.
3. Add the sugar and beat to combine.
4. Add the vanilla, and then beat in the eggs one at a time until just combined, about 30 seconds each. Don’t overbeat once the eggs are added; the cheesecake will puff up too much while baking, and the top will crack.
5. Pour the cream cheese mixture into the cooled crust and smooth the top.
6. Bake at 300 degrees F for 55 – 65 minutes. The center will seem to be only slightly set, and will be wobbly if you nudge it. The sides will puff slightly.
7. Cool completely on a rack, then cover and refrigerate 8 hours or overnight (I have gotten away with a 5 hour cooling, but I was on edge that it wouldn’t turn out; overnight is really best). When I put it in the refrigerator to set up, I remove the ring from my springform, and put the cheesecake on a cake stand. You can leave it in the springform if you don't have a cake stand.
For the caramel

1. In a large saucepan over medium heat, combine the sugar and water. Swirl to combine. All those warnings about stirring caramel and brushing down the sides of the pan with a wet pastry brush to avoid crystal formation? I avoid all that by just never stirring it at all. If I need to move it around the pan, I just swirl it.
2. Continue cooking until the sugar turns golden brown, swirling occasionally. You’re looking for something that’s about the color of dark honey. The problem with caramel is that it goes from perfect to burnt in the blink of an eye, so just when you find yourself thinking, “Any second now…” pull it off the heat. It should take 3-5 minutes.
3. Off the heat, carefully add the butter, then the cream. Don’t wait until the butter is melted; toss in the butter, give it a whisk, then pour in the cream. It will foam up, seize, and otherwise look like a total failure. Persevere! Add the vanilla extract and salt and continue whisking.
4. Return to medium low heat and whisk until smooth. (Added note: if your caramel is too thin, let it cook for awhile over a low heat. I've actually let it boil a bit--unintentionally--and just when I thought I'd ruined it, it turned out to be perfect.) Allow to cool slightly, about 15 minutes.
5. Remove cheesecake from the refrigerator and pour caramel over the top. I try to encourage mine to pool in the middle, but if you’re more of a drip-down-the-sides type, you can go with that. I just think the drippy makes sort of a mess on my cake stand, but maybe that doesn’t bother you.
6. Return the cheesecake to the refrigerator to let the caramel set, about 30 minutes. To serve, cut in slices (it’s pretty rich) with a sharp knife, wiping the blade clean after every slice. 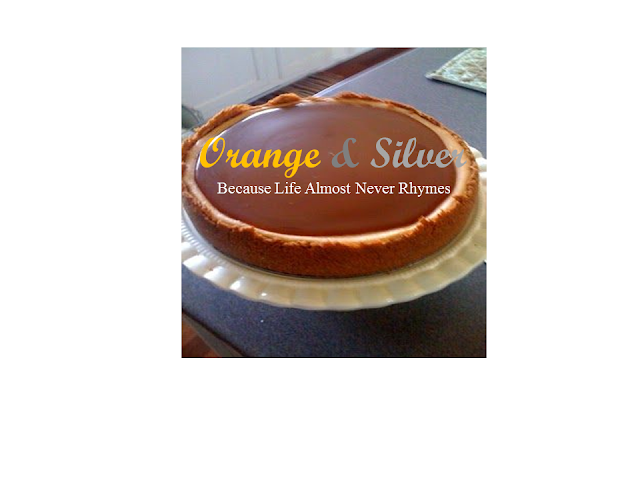 Oh wow, that sounds incredible. I had to laugh when you said to taste it - it makes perfect sense to me, but I swear more people don't do it than do. I've even had some wicked salty food in restaurants! Too funny,

On the blog I posted this on originally people kept coming in and saying "WAY TOO SALTY!" (except of course half of them said "way to salty" which made me want to cut a bitch), and I kept saying (nicely, but this is the gist of my meaning) "I can't be blamed for your inability to taste shit--salt is personal. Add a little and taste, then add a little more--don't just dump what I call for in there then bitch at me when you don't like it!"

I will actually give restaurants a pass because I don't really WANT them tasting my food before I get it! Granted, I'd send it back, but I wouldn't be too upset about it.

This looks extremely yummy....now, if I just had the time to actually make it *sigh*. But I'm bookmarking it for future use.

Gigi - it is a little time-consuming, but it's worth it!