I have to share with you guys something super weird that happened on these here Innernets a couple of weeks ago. I think this falls under the “It’s a small world” heading in my personal filing system. It involves me and a couple of other bloggers, a chance post about “five things about me” on a blog, Julia Louis-Dreyfus, and high school. Sound sufficiently random? It is. Ready? Here we go.

Michelle over at “Rubber Shoes in Hell” wrote a post based on a Facebook meme in which she was participating. It was to tell five random things about yourself, and then tag some other people do to do the same. Michelle doesn’t like to put people on the spot like that, so she tagged Elvis, Gandhi, and Winston Churchill, but in what would turn out to be an interesting stroke of luck, she also used it as material for her blog.

I read Michelle’s blog (and if you don’t, why not? Get over there! She’s awesome!) as does Cassandra over at The Next Delusion (again, not reading her? And her cool blog-partner Momus? You need to! A team written blog? How great is that?). Cassandra commented on Michelle’s post—her thing was that she’d met Ric Ocasek. Twice.

In my comments, I mentioned that I went to elementary school with JW Marriot’s granddaughters, and that I was at Julia Louis-Dreyfus’s high school graduation. I went to a school that started in third grade, and went up through high school. The graduation was held during the day on one of the last school days of the year, so everyone attended the graduation ceremony. I just happened to be in fifth grade the year Julia Louis-Dreyfus was a senior (and I have the yearbook that has her senior picture in it, along with about a million other pictures of her—she was in all the plays, and was, I believe, extremely popular with her classmates).

I went back to the comment thread a little while later because Michelle always has something to say when you comment (I love that and try to do it myself—it’s always nice when there’s a bit of a dialog). I found Michelle’s comment, but also one from Cassandra: “Oh my God! You went to my high school! I went to High School with the Marriott girls and Julia Louis Dreyfus SPOKE at my graduation. This is a small freaking world.”

What the what?!? So we emailed on the side, and it turns out that, indeed, Cassandra went to this school, but our tenures never overlapped. I attended from fourth through sixth grades, then went on to a different school that was closer to my house, and had a very different atmosphere. Cassandra started in ninth grade, and did all four years of high school there.

The school Cassandra and I attended was an all-girls school that was founded in the early part of the 20th century for the academic and spiritual education of girls (it’s not parochial, they just stress an education of the mind, soul and spirit). We wore uniforms, although when you got to middle and upper school, you could be “out of uniform” on Fridays. There were guidelines though—no shoes without heel straps, and restrictions regarding other items of clothing. For me, going to this school was kind of like going to school at a country club (I mean that in a good way). There’s an indoor pool (although it was built after I left), a weight room, a theater, and the whole thing is surrounded on three sides by rolling hills and fields, and has a wooded plot on the fourth. It’s a bit of pastoral tranquility that’s just off a busy road in a populous suburb of a major city.

When I transferred, I switched to a school that was inside the city limits. It was housed in a building that had at one point been a girl’s school, but had most recently been owned by a nearby law school. It was started in about 1968, so it was quite a bit “younger” than Cassandra’s and my mutual school.  It was co-ed, started in seventh grade and went through high school, and there were no uniforms. We called our teachers by their first names. The kids who were seniors when I was in seventh grade told stories about when they first started, and how they sometimes sat on the floor of the classroom because there weren’t always enough desks (they had remedied this by the time I got there). There were no school buses; I took the city bus from my house. We had the option to leave the school building during lunch to go to nearby stores (there was a Giant that had a salad bar, and some places that sold sandwiches) instead of eating a hot lunch in the school cafeteria (because there was no school cafeteria). In short, it was as different from my previous school as it could have been.

Understand I’m not intending to say one or the other was a better school. They’re both good schools with excellent reputations. I’m just pointing out how very different they were.

So Cassandra and I emailed, and as one does, we tossed around some names. She picked girls she knew had been there in fourth and fifth grade, and indeed, I did recognize everyone’s name. We talked about where some of the girls were now, and some who’d left whose whereabouts were unknown to us (one girl had left just before senior year to attend boarding school).

So to summarize, Michelle wrote a post that Cassandra and I both read and commented on, and in the process discovered we’d both gone to the same school (albeit and different times) and even knew some of the same people. But we figured it out in the comments section of a blog run by someone neither of us has ever met. We just both happened to stumble on her blog at one time or another. How weird is that? 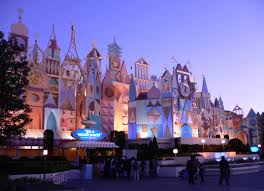 Of course, now you've got that song in your head. Sorry.﻿

A little while ago I was searching through some old pictures to find one to use on Facebook for Throwback Thursday. The box was a random collection of my family pictures from a generation or two ago, plus some from my childhood, and a handful of pictures of my own kids. I pulled out a small picture, taken in about 1980 with one of those Kodak cameras with the drop in film cartridge and the four sided flash that went off and then left what looked like a mixture of ash and whipped cream inside the flash cube.  It was a picture of my birthday party from the fourth grade. I looked at the girls in the picture, and named them to myself: my neighbor Laura, Tamara, Jessica, Melissa, and…whoa. There was Josie Levine! That was one of the girls Cassandra had said she was friendly with in high school, and here she was in a picture of my fourth grade birthday party.

It’s not a particularly original thought, but it really is a very strange, very small world.
Posted by Tracy

It was just so funny. Because seriously, neither of us knows you at all (I mean, that I know of!) and yet we both stumbled on you and thus each other. We were both so surprised! :)

One of the most truly amazing coincidences of my life so far. Especially given that Tracy now lives on the opposite side of the country from me. We never, ever would have crossed paths in the "real world".

To stretch the coincidence even farther, it turns out that Tracy's husband grew up in the same town where I went to college (which is nowhere near the area where we both grew up).

I almost added that part of the story, but it would have made the post like 2000 words long :) But it's true! And weird!

It truly IS a small world. One made even smaller with the advent of the Internet.

Indeed, it was the Internet that enabled us to figure this out. So yay for technology!

What a cool commingling of the cyber world and the "real" world!

We were both totally floored when we realized it. The part where she went to college in the town my husband grew up in was weird enough, but the high school thing was just amazing :)