How I Met Your Father

Remember your first date with your current spouse? I do. Well, you probably do too. But this is my blog, so you’re hearing about mine. But you can tell me about yours in the comments, if you want. I’d love to hear about it. But first, you get to hear about mine.


My husband and I met in college. We were both what they call “nontraditional age students” (read: we both dicked around and took fucking forever to get through college). We were taking a Dickens class together. My husband still mocks me for not having read “A Tale of Two Cities,” because I didn’t, but I will say that “Bleak House” is one of my favorite books to this day. He asked me out three times, I refused all three times (sometimes one hits a blog post topic dry spell—saving that story for just such a time). A few months later I was dating the biggest asshole ever to walk the Earth (let’s swap stories sometime—even if you do turn out to have dated a bigger one, it’ll make for good laughs over margaritas). A very old and dear friend listened to my tales of his treatment of me (which I didn’t think was that bad, but she did, and she was right) and said, “Ugh. Don’t you know any nice guys?” I thought for a minute. For some reason, my now-husband came to mind.
“One. I know one nice guy.”
“THEN ASK HIM OUT.”
So I did.
I called him and suggested we go out. Mr. Cool said, “Let me call you Friday afternoon at work, and we can make a plan for Saturday. Would that work?” Sure, I said.
Friday afternoon came and went. It was really more like Friday evening. At 4:54 p.m. my desk phone rang. It was Mr. Cool, calling to make plans.
I forget the really detailed details, but we agreed that I would come to his house, and we would figure out where to go for dinner. There was something about his not wanting me to do a ton of research on restaurants we might go to in order to maintain a certain air of spontaneity. It’s probably worth noting that my job was Research Assistant for the ad sales department of a national newspaper, so research was kind of what I did. Also, this was the early 90s when restaurants were like theater and plays thirty years previously, and you went to the big names so you could say in casual conversation, “Oh sure, I’ve been there.” But I cooperated, and met him at his house as planned.
We decided to go to restaurant in Washington, D.C. called Jaleo, owned by Jose Andres. It has now expanded to something like six locations but this was the original location 20 years ago. I remember we had shrimp with garlic and tomatoes, an apple and Manchego salad (which I make to this day, and will give you the recipe for, if you want it—it involves cutting a lot of things into matchstick size pieces and dressing it with olive oil and sherry vinegar, but it’s very good), plus a number of other things, and a bottle of wine. We ate, we drank, we dug each other. He excused himself to go to the restroom, and leaned over and kissed me for the first time as he stood up. After dinner we went for a walk on the National Mall in the dark, with all the monuments theatrically lit. It was all nauseatingly romantic. As I left his house that night (no, we did not. I’m not that kind of girl. We waited a least a month, as I recall), I knew this was the man I would marry. 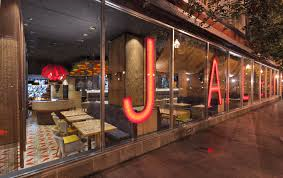 This is the scene of the crime
We started dating. Everything was great, no hiccups. We got married, fa la la.
However, starting the week after our first date, and for the next 20 years (and counting) people have gotten a very interesting impression of where we went on our first date any time either of us has told this story. Jaleo bills itself as a tapas bar (as indeed it is). You order lots of small plates and share them, and if you like something a lot, you order more of it. Since many people have never heard of Jaleo, we just say, "We went to a tapas bar."
Humor me here. Go find someone near you and say to them casually, in your normal voice without any enunciation, “Let’s go to a tapas bar.”
What was their reaction? Furrowed brow? Suspicious side eye? Appalled recoil? Jumped at the offer? Reported you to HR?
That’s because you said, “Let’s go to a TAH-PAHS bar,” but what they heard was, “Let’s go to a TOP-LESS bar.” Feel free to tell them they have a dirty mind, if you want to make them feel sheepish about the whole thing, but know that it’s what absolutely anyone you say that to will hear (unless they're from Spain, or possibly married to someone who is).
He told me at some point after we’d been dating for awhile that a few days after our first date, he’d been talking to some friends, who had known we were going out, and who’d asked how said date went. When he told them he’d taken me to a tapas bar, they said, “Whoa—does she have any single friends? What girl lets you take them to a topless bar?”
Ha fucking ha. Eyeroll.
For the last twenty years people have thought that our first date was at a topless bar. I have since learned to tell this story by saying, “We went to a tapas bar. Not a TOP-LESS bar. A TAH-PAS bar—a restaurant where they serve Spanish small plates that you share.” I mean after all, like I said, I am NOT that kind of girl. But I still get a funny look for a few seconds before I can get to the explanation part of my sentence.
P.S. Mr. Cool told me long after the fact that he actually got caught up in work and totally forgot he was supposed to call that Friday afternoon. He was racing home from work, praying that I’d still be at my desk when he got home just before 5 so I could take the call. So much for Mr. Cool.
Posted by Tracy

Email ThisBlogThis!Share to TwitterShare to FacebookShare to Pinterest
Labels: nostalgia, things that sound dirty but aren't

Love Jaleo. I've been to the Bethesda location many a time!

I'd have probably had better luck at a Topless bar. Two wives and two divorces later and my stories aren't nearly as sweet. The first, I was 23, she was 18 and I fell in love . . . with her boobs (and she WAS that kind of girl). My second wife, when we met, was my neighbors wife at the time, and she was married to (probably the asshole that you dated. It could happen because I was stationed at Quantico at the time so DC is not out of the question) someone else. When I finally got out of the Marines and went to move back to North Carolina, I backed the moving truck up to my apartment and loaded up my shit AND hers and we took off together.

So she was my second wife, I was her third husband . . . and now she has a fourth husband (who, as it turned out, was a friend of mine - sense a theme here?)

I'm thinking the Topless Bar is my best option at this point, because we had a Tapas bar in Raleigh for a while and it was REALLY good, but it didn't last very long. Guess it just wasn't destined to be a "Raleigh thing".

Maybe there is one here in Tampa.

Eric - Could have been that asshole. He would marry the kind of girl who would be a serial wife, because he was pretty much interested in one thing. And I don't mean sparkling conversation.

I swear to god, every person who hears that story. :)

You knew? You knew you were going to marry him? How did you know? Maybe b/c he was the only nice guy you knew - I guess that really slims down your choices. I dated my husband for 5 yrs & still didn't know. Just kidding. I knew, but apparently we were in no rush. I have a similar story. We went to diner to a nice restaurant he picked out. I remember what we ate. I left after dinner b/c I'm no floozy & made him wait at least a month.

I don't know but I did and I never doubted it. I remember backing out of his driveway and thinking, "Yep, gonna marry this one." And there was never a time when I thought, "On second thought..." We dated for two years and were engaged for almost one, so it wasn't one of those "married him two weeks after we met" things, but I just knew.

They really should serve tapas at topless bars though, shouldn't they? I'm with OneFunnyMotha. How did you know?

Liz - that would be pretty funny, although I suspect the usual clientele at topless bars is more about buffalo wings and nachos than apple and manchego salad :)

I don't know--I really don't. I just knew it was the right thing (and for once in my life, I was right about something!)