About three years ago when we were driving someplace my oldest, who was then about 8, reached over, punched my upper arm, and said, “Red one, no punch backs.”

I had completely forgotten about the game called either Slug Bug or Punch Buggy, depending on where you grew up. I guess it’s sort of like soda/pop/coke. Anyway, I played this a little bit as a child, although as an only child I didn’t really have anyone to play with and my parents weren’t much for the game. Plus we actually drove a Bug for the first sixteen years of my life, so there would have been a lot of punching if we’d been really active participants. If you’re not familiar with the rules, the first person to see a VW Bug announces “[Color of car] one, no punch backs,” and punches the people in his or her immediate vicinity in the arm. There are some variations, depending on who introduced you to this game. Some people say it’s not really a slug bug unless it’s an old one, not the new ones that have been produced in the last decade or so. In our family we have no such restrictions. Bugs are bugs and we punch. Because we’re all intellectual and shit.

This should be a fairly straight forward game. I see it, I gently punch you in the arm while announcing the color and that there are “no punch backs.” You are then forbidden to punch me until the next time a slug bug comes into sight, and you see it first. Well, that’s what should happen, of course, but in the hands of my children, this game takes on a number of additional rules and nuances that of course are all in the favor of the individual creating the rule.

The first is the color quibble. If one of them says “Grey one, no punch backs” when the vehicle sighted is a sort of graphite, another one will announce, “SILVER one, no punch backs” and punch everyone again. Whereupon the child who announced the grey one throws back their head and howls in outrage, “You can’t punch me again. I already punched you on that one!”  Groups of people who have been denied basic civil rights by the governments of overbearing dictators react with less venom than my kids if they feel they’re being punched unjustly.

Of course, they’re all playing, unless they’re not the first one to see the car. Then a sibling will announce, “Green one, no punch backs.” Immediately, sometimes in mid-punch, at least one of them will announce, “NOT PLAYING.” And if the puncher has the temerity to punch anyway, they will announce in a loud, angry voice, “I said ‘NOT PLAYING.’ Are you totally stupid?” And indeed they are not playing, until they sight the next one and have the punching advantage, in which case you better believe they’re fucking playing, bruh. 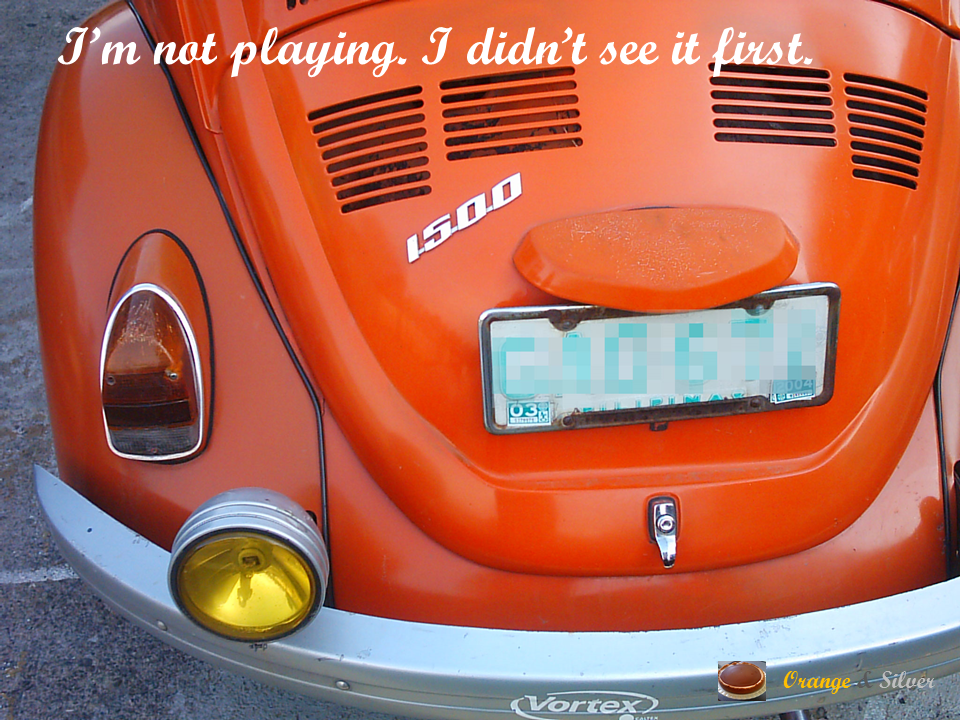 The most controversial punching is that which is done on a few outlier “types” of Bugs. Every now and then, just because they haven’t been involved in a verbal altercation with one of their siblings within the previous four minutes, one kid will announce something like, “Invisible one, no punch backs,” or “Imaginary one, no punch backs,” and distribute slugs all around. Naturally this is intolerable, and at least one of them becomes vehemently angry and lashes out with something like, “You can’t punch on invisible ones!” What they overlook is that fact that clearly, they just did get punched on an invisible one, and there’s not really any way to undo it or “take it back.” As you may imagine, this in no way deters them from defending their position on “invisible” or “imaginary” slug bugs, and their sibling’s unforgiveable transgression in punching them.

They’ve tried to “punch” on other things, like cars that sort of look like Bugs but aren’t—Fiats and a few Toyotas have a similar profile, or occasionally they’ll pick something like Minis. I have to draw the line there. Bugs are bad enough, but if they were punching (and arguing, and “not playing,” and inventing mythical ones, and arguing—did I mention arguing?) for multiple types of vehicles, I would lose my shit in the car faster than I already do. As it is I spend half the time I’m driving as a feral hell beast, shrieking at them to stop arguing about the stupid cars and pipe down so I don’t run us off the road, so I don’t really need anything else that will set me off, thanks.
Posted by Tracy

Email ThisBlogThis!Share to TwitterShare to FacebookShare to Pinterest
Labels: slug bugs, things kids do, things that kids argue about which is pretty much everything for fuck's sake

I've only heard of this game, never been a participant. My dad was (and still is) a bit of a tyrant, so my brother and I playing any kind of disruptive game in the car would have been met with severe consequences. And there was that time my dad drove us from New York to Florida in a 1970 Chevy Vega. Something we never, ever wanted to repeat again.

I actually never played that game until I was a teenager and my older stepbrother introduced me to it. He was 8 years older than me and punched REALLY HARD so it wasn't all that much fun!

We've had some hard punching, but I've had to insist that it be more of a "tap" than a true punch. Mostly because, holy hell, they sock me hard in the arm while I'm driving and I practically swerve off the road. You can't hit your siblings any harder than you'd hit me while I'm actually driving. They're now down with what amounts to a little "tap" vs an actual SLUG. Otherwise this game would be outlawed altogether.

I remember playing this when I was a kid and there was no "one gentle punch". No. There were MULTIPLE FRICKIN' HARD PUNCHES THAT LEFT BRUISES ALL OVER YOUR DAMN ARM. No bueno.

I can kinda remember playing that game with my brother - but I think my mom outlawed it fairly quickly.

As long as it's gentle, we're ok. Do not think that we didn't start out with middle-knuckle-extended whaling. Mom demanded that it be a gentle tap because 1) I can't drive with all that screaming and 2) MOMMY BRUISES EASILY. CUT THAT SHIT OUT.

We call it punch buggy and I always pray my kids do see the car coming.

And of course, they always see it. I say, "Go find your retainer/shoes/backpack/homework/what have you" and they wouldn't be able to find it if it was on fire next to their left foot. We're driving along with two hundred other cars and they can spot the Bug in three seconds flat.

My kids used to play this game. I never got the point of the hitting games. I am firmly entrenched in my 'wussy' status.

I allow them to "hit" me but it must be VERY gentle. Mostly they don't even hit anymore, they just say "Blue one, no punch backs" because they can't reach all their siblings and me. And there's a certain status in being the first to say it now. But even if they're just saying it, they still argue about who said it first. Jesus.

We play this game in my family; have for years.
I am the current holder of the Golden Fist, master of the Slug Bug, and all around badass.


I'm not sure whether I should be embarrassed by that admission or not.