Traditions of the Present

After Monday’s sad trombone about my childhood non-belief in Santa Claus, I was thinking about other Christmas-related events from my childhood. Prompted by one of those seasonal articles like, “One Hundred Holiday Traditions to Start This Year!” in some magazine I was thinking about traditions I’ve been exposed to in the course of my lifetime. One area that stood out clearly was the variety of rituals that surround present opening.

When I was a kid, my mother always wanted me to “play elf.” That is, she wanted me to go to the tree, find everyone a present, distribute them, then do it again until all the presents were opened. I hated this. I didn’t want to bounce up and down and traipse around the room any more than anyone else did, but I was forced to because I was the youngest (and the only child). I still hate it, but now that I’m a grownup I can refuse to do it. I don’t make my kids do it, either.

When we started going to my in-laws for Christmas, my sister-in-law actually liked playing elf. I don’t care if that’s how people want to open presents, as long as I’m not the one that has to pass them out. If she was happy doing it, I was happy letting her.

One part of the present-opening at my in laws that I was not happy about was the laser focus on the opener. We’d go around one by one and open our presents, with everyone else watching intently as the gift was revealed.

The problem was my mother in law was notorious for both reusing boxes, and for buying a mix of really great gifts and strange junk. You’d remove the gift wrap and think, “She thought I’d want a Norelco electric razor?” only to realize that she’d just used a handy container which happened to fit the set of microplane graters you’d been dying for. It was disconcerting to have half a dozen people keenly watching your facial expressions, particularly when the possibility was very real one of them could be, “What the fuck is this…?

I would have much preferred we all open one present at the same time, then go around and admire what everyone else had been given. It would have given me the chance to settle my expression after opening something completely bizarre like a small tabletop statue of a sparrow (a real gift I was given, for no reason I can think of—I had never expressed a particular fondness for sparrows, or table top dust collectors, but about 20% of the gifts my mother in law gave were this sort of random, inexplicable thing).

Now I have my own house and I can do present opening my own way. I prefer to have a pile of all my presents and open them one at a time. At this point my kids are still in the “rip everything open as fast as possible and look around for more” stage, but as they get older, I hope they’ll learn to savor the process. And just because they rip everything open right away doesn’t mean I have to. But I like to have everything in front of me so I know how many things I have left to open. I hate to open the last present only to find that it was the last present. Like eating the last potato chip or M&M when you didn’t realize it was the last one—you feel let down because there aren’t more, and you didn’t fully appreciate the last one for what it was.

I suppose as the kids get older we’ll move more toward the leisurely opening sessions like the ones we had at my in laws house. I hear there may even come a day when I have to actually wake my children up in order to get them to come open presents, instead of having them get up at 4 a.m. and wake us up. But my husband and I have made a pledge never to use weird boxes for gifts. It’s just not fair to a 13 year old to have them spend even half a minute thinking that their mom got them a Salad Shooter, only to have it be a blue tooth speaker. That’s the kind of thing that can lead to therapy.


What present opening traditions do you have? Have you ever been forced to play elf? Does your family give weird gifts, or good gifts in weird packages? 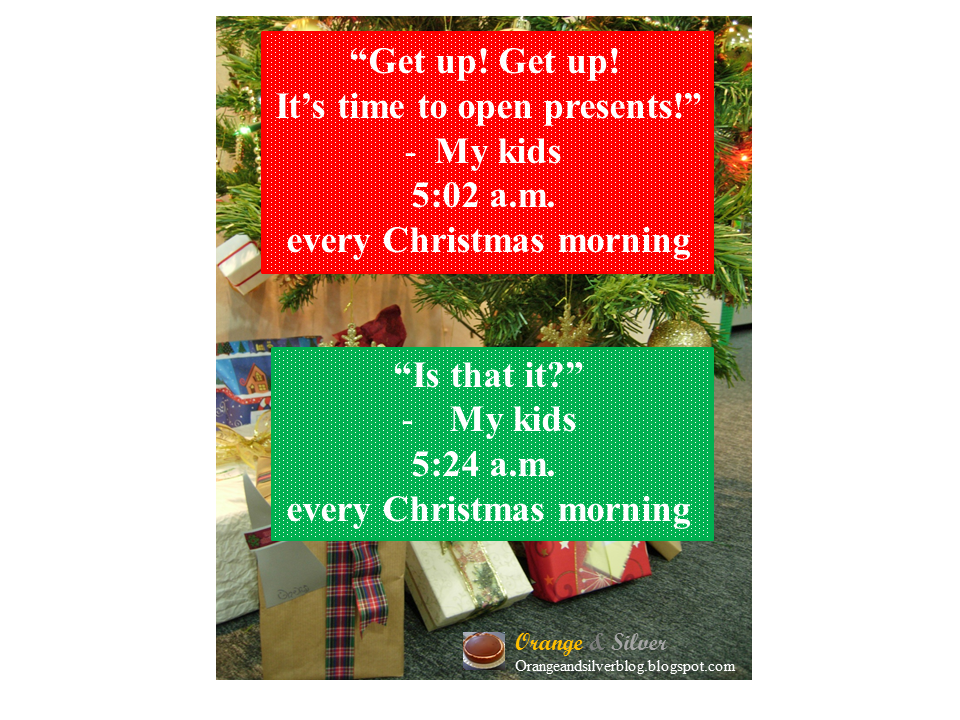 That's funny about everyone staring as you open the gift. That moment you must modulate your facial expression to one of gleeful delight is intense.

It was horrible because I have NO poker face. Every emotion I have would plainly scroll across my face like a movie marquee. There are banner signs in Times Square that are less obvious than my face when I'm opening a completely weird gift. And my MIL could give some weird gifts, let me tell you!

Our daughter is 3 so we like to open a few at a time (2-3), then she (typically) plays with them for awhile and in another hour (or two) we start the process all over again.

Well, that's how we did it LAST year & it worked, we'll see what happens THIS year. ;)

Yeah, at 12, 9, 9, and 8, they pretty much just rip into them. My efforts at slowing them down are pretty much futile. Maybe I'll try hiding half of them this year. When they've opened all of the ones that are out, I can say, "Hm, seems to me I bought more than that..." Might work!

I am quite sure at this point that it won't shock you to hear that my mother also made me play elf and called it exactly that (and that I also hated it). My son now LOVES being the present distributor so I let him.

I'd have been more shocked if she hadn't. Just further proof of our sameness. Yeah, my kids seem to enjoy it too. I hoard my own presents, and let them distribute theirs.

This just reminded me of the year my brother begged for a pair of boots. That's all he wanted. Come Christmas morning, he unwrapped a boot box...but it contained something else. He was so disappointed and angry (he was a teen, he hadn't learned gratitude). That's the only thing I remember about that Christmas.

And yeah, it's true. One day you will be banging on the kid's doors yelling, "Get UP! It's Christmas!!!"

On the plus side, at least you get to have your coffee in peace first.

Although to be fair to your brother, I can understand his disappointment.

This is what they tell me--I'll have to wake them, and I'll have as many hours as I please to linger over my coffee and donut or whatever. If it comes to pass, it will be a wonderful present for me! :)

That is a hilarious image and I hope you have every intention of meme-ing it up. As for your post, I HATED being Elf because then you don't get to just sit and open your own gifts. It was Bull!Shit!

Right?!?? Being Elf sucks balls. I hated it and I won't force my kids to do it.

Funny and touching. I can relate. I never want people to see my face as I open their gift since I'm not sure my expression will match up to what they want to see and the pressure just makes it worse but I DO want to see others' expressions. I'm a hypocrite like that. My sister and I still play elf but it's fine. Most of my family except for Z are senior citizens so they either come by their inability to read naturally (Zoe) or they can't see too well, or move well either.

Thanks! Yeah, the stuff my MIL would give could be so strange, it was always a risk!

Your parents didn't let you have any fun did they? I didn't know you could enforce any rules on kids on Christmas morning. Like you, I like to have all my gifts stacked up in front of me (it's so true about the M&M's. What a disappointment.) Fortunately for me my kids like to run down & gather up all their presents & make piles for everyone so when my husband & I come down everything is all set. My kids are still in the “rip everything open as fast as possible and look around for more” stage, too. I think they might always be. Merry Christmas!

The only rule I've managed to enforce is, you can only open your stocking and see what your "big" gift is before Mom and Dad get up. You can't open anything else. I was an only child and a girl, so I was pretty docile...