I don’t remember when it happened, but my mom told me there was no Santa Claus. I don’t mean she broke it to me that all those years I’d believed in something that didn’t really exist. I mean when I was three or four or however old it is kids are when they can get their heads around Santa Claus, she said he wasn’t real, no matter what my friends told me.

Before you condemn her (if you’re inclined to), let me explain her logic.

She told me later she couldn’t bring herself to lie to me. She felt telling me about a man in a red suit who flies around the world in one night and brings you presents and expecting me to believe it was insulting my intelligence. She was sure I’d recognize it for the impossible myth that it is and be disillusioned that she tricked me with this preposterous fiction. I think she overestimated how smart I really was, and how likely I was to view her participation in this almost universal bit of fantasy as deceit, but that’s neither here nor there. (To answer the obvious question, there was also no tooth fairy and no Easter Bunny in my childhood.)

She said that shortly after she told me there was no Santa I came home from school and insisted Santa was real, and she was to shut her pie hole (or whatever the four year old version of that was).

That may be so, but I will tell you I never genuinely believed in Santa.

I wanted to. I tried. I would lie in bed and pretend I was listening for sleigh bells and hooves on the roof.

But I knew it was a lie. Even at age five or six I knew I was listening for something that would never happen.

As ridiculous as it is, all my life I have felt I missed out on something really important by not being invited to participate in Santa Claus. I looked around at all my friends with their “Santa presents” and their carrots for the reindeer, and I was outside looking in. I didn’t even consider myself intellectually superior to them, because I was five and didn’t know what the fuck that meant.

I certainly told my own children about Santa Claus. All four of them have believed for years. The oldest is a bit on the suspicious side, and has always been looking for a way to expose me: an inconsistency in the story, a gift that’s just too perfectly chosen based on a request, a too-similar handwriting on the “thank you” note left beside the plate of cookie crumbs. But the younger three believe with all their hearts, and even at nine and eight still do. I recall when I was a kid that eight or nine was about the time parents were being exposed, and my friends stopped believing. Now the children of my  friends seem to keep the faith through fifth and sixth grades, according to a very scientific, very sophisticated survey I conducted by asking half a dozen of my closest friends about it.

So careful am I to preserve their faith that three or four times I have alt-tabbed to another screen when one of my nine year olds walked over to talk to me while I was writing this, lest he read something like “no Santa” over my shoulder.

I honestly believe that Santa is a good thing, providing a valuable and beneficial lesson: just because you can’t see it, just because it sounds too farfetched to be remotely real, doesn’t mean it might not be true. What harm does it do to let kids believe that the impossible is possible? What’s the harm in promoting fantasy and magic? Kids eventually figure out those things aren’t real (or are they? as one of my nine year olds would say) but to have time to trust in something unseen and almost unbelievable is a worthwhile exercise to me.

I think it teaches them unquestioning faith, which is something that’s in pretty short supply in our cynical, skeptical society. We expect kids to think they can do anything they put their minds to. If they think they can’t, couldn’t we remind them that when they were little they didn’t think twice about their faith in a man who got in a sleigh on December 24th and in one night delivered a present to every kid in the whole world? Wouldn’t that serve as a touchstone for their belief that the impossible is indeed possible, no matter how unrealistic it seems at the time? Let’s teach them that just because it sounds impossible doesn’t mean it is. I’m pretty sure that’s how we ended up with the pyramids, space travel, and Disneyland. 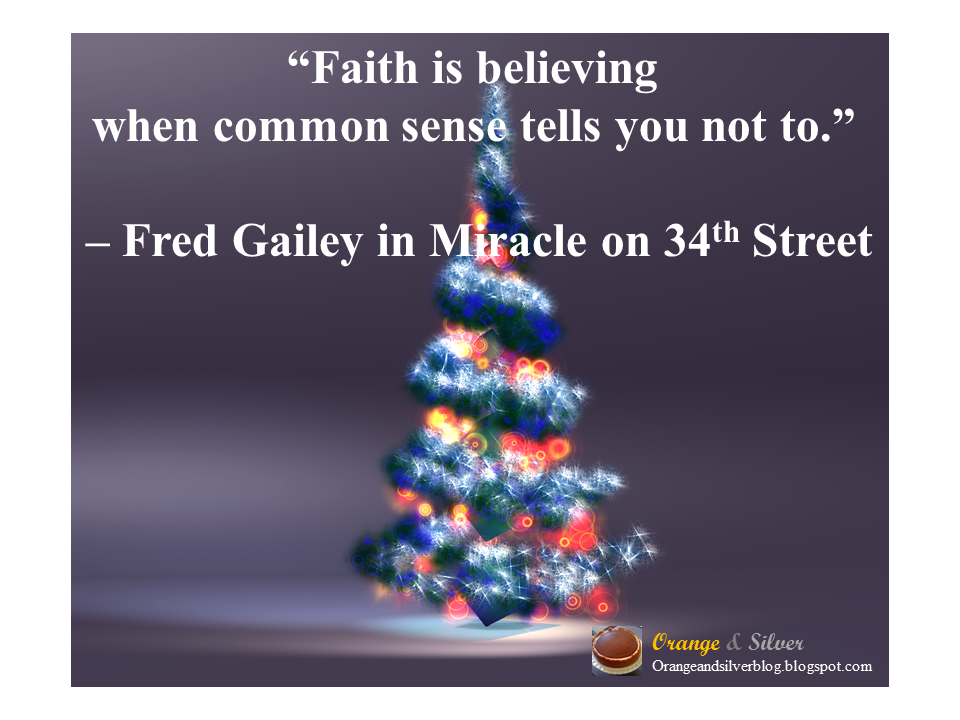 Email ThisBlogThis!Share to TwitterShare to FacebookShare to Pinterest
Labels: holiday spirit or lack thereof, my idyllic childhood, Santa Claus, the innocence of childhood

My dad feels similarly to your mom. My parents did encourage us to believe in Santa Claus, but my dad often says if he had to do it over, he wouldn't have "lied" to us. But I am glad he did! I loved believing in Santa Claus and other magical beings! And to this day, I believe a little bit. Maybe not literally that there is a dude who sneaks into people's houses and leaves toys like some sort of reverse burglar. But I believe that life can be magical, and that one person can bring a lot of joy to others.

I love the way it played out in "Miracle on 34th St"--Kris gave Fred the driving directions home a different way, and as they were driving along, here's the very house the little girl wanted, and it's for sale! Did Kris sneak into her house at 2 a.m. and leave a box with a key? No, but he set in motion the series of events to enable them to find it.

I subscribe to the version of "Santa Claus" that's described in the Little House books--whenever anyone is unselfish, and wants others to be happy without getting anything in return, that's "Santa Claus." So there IS a Santa Claus, and he's in all of us :)

I'm waiting for the "wow, Mom, it's amazing how Santa's handwriting looks JUST LIKE YOURS" conversation, but it hasn't happened yet. ;)

It takes awhile for that awareness--handwriting, gee how come Santa uses the same giftwrap you do, how did Santa know where the screwdriver was to put something together, etc. Those things seem to slip past them unless they're REALLY blatant. At least, they did mine, but mine aren't the sharpest tacks in the cork board some days...

Aww, I'm sorry you didn't get to believe, and you didn't even get to be smug to your kindergarten cohorts and scoff at them every time they mentioned Santa. Before I had kids I felt a bit like your mom (although I didn't overestimate their ability to see through the sham at 3). I didn't want to lie to my kids. BUt once I had kids, there was no way I could crush their little dreams & tell them Santa was a fraud. If you do that, it takes the magic away & that's what Christmas is all about. Even now that my son knows it's not real he still wants to leave cookies out for Santa. It's so cute. My son is also exactly like Buddy from Elf. I think the character was base on him.

I have a Buddy the Elf too, but he still believes (9). I'm hoping he's not too crushed when he finds out the truth. My hope is that the excitement of getting to help pick presents for everyone else (so, you know, to BE Santa) will make up for the loss of that dream.