A few weeks ago I saw someone on Twitter asking at what point kids go from asking a million questions to thinking you’re an idiot who knows nothing, therefore not asking questions at all. My own experience is limited to children up to age twelve, but so far, he still asks me a million questions. The difference between age four and now is that now when I answer him, he tells me I’m wrong.

At this point he’ll argue about anything at all. The temperature, how long it takes to fly to Disneyland, or what kind of bird that is in our yard. A month or so ago, we had this exchange:

Really? I thought, really? You want to fight about this?

My favorite argument is the one we have about whether or not he argues about everything. That one always makes me feel like I’m in the middle of some kind of Dada-inspired performance art piece.

So far I haven’t gotten too many dismissive gestures, although I am proud to tell you that over the weekend my instructions regarding some  chore or other were met with an eye roll and a “blah blah” puppet hand. So that’s quite a milestone. I have always maintained that while Tweens have embraced eye rolling as their own, they learned it from their mothers

The fact is, I can’t really be too surprised that he’d argue with a stop sign. One of my own earliest memories is standing in my crib, leaning on the railing while I jumped up and down on the mattress. My mother saw me doing it, and cautioned me against it.

“You’ll fall out and crack your bean,” she said.

I remember looking down at the floor next to my crib and seeing the soft fluffy blue oval  rug with the white lamb on it—my “lambie” rug, as I called it, that was on the floor, and thinking, “No I won’t—my lambie rug is there. I’ll land on that and be fine.” I didn’t say it, but I remember thinking it. I was about two years old.

So with that kind of genetics it’s no wonder he looks at every verbal exchange as an opportunity for debate.

I’ve heard when they get to be teens they clam up. Instead of telling you you’re wrong and arguing about it, they just roll their eyes and turn up their iPods. I’m not sure which is the better choice. The silent treatment is probably more maddening (“You could at least answer when I speak to you!”), but I have to tell you that spending every waking minute of every day having my responses challenged by someone who can’t tell when his shirt is on backwards is pretty exhausting. 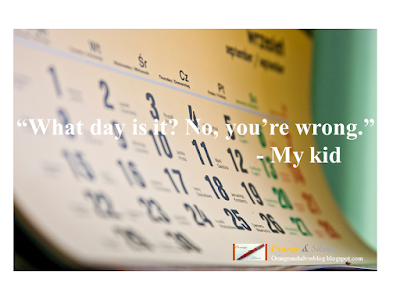 Email ThisBlogThis!Share to TwitterShare to FacebookShare to Pinterest
Labels: things kids do, things that kids argue about which is pretty much everything for fuck's sake, tweens

Oh jeez...my son would argue with me all day long. Even when he was smaller. And still even now...but now I think he does it just to drive me insane. I'm telling you, that kid should have majored in law.

I feel that pain. And one of the younger ones is constantly asking, "What if [some ridiculous thing that would never happen] happened?" What if, what if, what if. Argue, argue, argue. Gah!

It's a good thing you weren't in my car yesterday with my 13 year old and me. It got UGLY. Apparently not only do I not know anything, but just my very existence annoys him. He gives us plenty of eye rolls, sighs, slamming doors, and oh my god mutterings under his breath. I'm hoping things improve when he hits the college years (??).

Right now we're 80/20 for decent behavior/asshole. I really expect the balance to shift the other way within the next year or so, and I suspect that, yes, it will remain that way until they go off to college, are forced to eat dorm food and clean up after themselves (or not) and realize how good they actually have it at home. At which time they will return to us saying, "You were right about a couple of things..." and we, because we are saintly and good, will not say "TOLD YOU." Or perhaps we will, because while we may be saintly and good, we are not perfect and we're suffering through a lot of crap at their hands right now and it's going to feel GOOD to hear them be forced to admit that we're NOT total morons!

True. True. True. And, true.
We are firmly in the eye roll camp with and 11 & 13-year-old in the house. I haven't known what the hell I have been talking about for two years. Welcome to the big leagues!

I just insisted that 12 not make his brother move and instead do his homework at a different desk. I got three heavy sighs, five eye rolls, a backpack dropped on the floor, and a binder slammed on the desk top. Good times. We're all about the attitude here tonight!

Mine are 14 and 1/2 and almost 16. My daughter (almost 16) barely talks to me and yet still manages to convey that everything I do/say is either wrong or stupid. She texted me for support from school yesterday because of some mean girl drama that was happening. When she got home I asked her how she was and got a very terse "I'm fine" before she stomped up stairs. My husband overheard her say to some visiting friends later "DON'T say anything to my mom--she knows what's going on." *Sigh*

My son has a sweeter disposition and we've made a deal that I'll never touch him or be affectionate in public--because all boys his age are embarrassed by their parents. He admits it's silly , but that he wants to go by the social rules. He never rolls his eyes or says anything outright rude to me, but can still convey with tone of voice and body language when my questions or concerns are annoying him.

I guess the way your kids will let you know how ridiculous you are partly depends on their personalities. But I definitely prefer being told I'm wrong than barely being spoken to at all. I'm just too insecure to have all that wrath directed at me and can't wait for this to end. Yeesh--4 teenagers at once? Batten down the hatches!

When the youngest is 14, the oldest will be 18, so my hope is that we'll have the worst of the oldest's drama over with by the time my daughter is on deck for it. I've got one that I suspect will always be the sweet one--he's the one now who still wants a hug goodbye at the bus stop, although he's not quite 10. Since three of them are very close in age (twins, plus one 16 mos younger), I'm wondering how that will affect their teen behavior. They're all pretty chummy right now--actually all four of them are. I was an only child so I have no idea if they'll offer any support for each other. But I know my days of knowing anything at all are numbered. Pretty soon there will be four who think I'm an idiot. Oh well!

You might want to just start saying that. You're going to end up saying it in eight to ten years!