So You Want to Be an Internet Troll

So you want to be an Internet troll. Bravo. It’s a growth industry.

Having said that, there are a lot of trolls who make some very basic mistakes when leaving nasty comments. You don’t want to be one of those—you want to be the best troll you can be. Here’s a quick primer on some things to watch out for when spewing your venom and vitriol across the Internet.

Actually read the article, not just the title
Understand what the author is saying, and what their intent is. Try not to intentionally misunderstand the author’s message. If they’re expressing an opinion, do not assume what they’re really saying is, “This isn’t just my opinion; it is the truth and the light. If you don’t agree with me, you are wrong and you should be ashamed of your shameful wrongness.” If they’re trying to be funny, even if it isn’t your style of humor, try not to be a massive dick about it. If they’re suggesting something completely ridiculous (like, oh, people actually setting out to be Internet trolls and needing instructions for things they shouldn’t do, to offer a completely random example) don’t take them seriously. Try to act like you have a sense of humor that extends beyond knock knock jokes and the kind of shit you read on Bazooka bubblegum wrappers.

Brush up on grammar, spelling, and punctuation
Remember, you’re slashing a writer here. There’s a pretty good chance he or she knows the difference between your and you’re, and when to use who versus whom. Stupid shit like using 12 periods in between each sentence, or blatant misspellings (hint: almost every comment section has a Spell Check built into it; make it your friend), are going to arouse scorn and mockery, and we will laugh at you in our writer secret Facebook groups. Your comment will be dismissed as pathetic bullshit from an uneducated moron. I mean, you’re leaving a nasty trollish comment anyway, so you’re pretty sure to be dismissed even if your prose is a miracle of linguistic composition with flawless syntax and dazzling arguments, but try not to embarrass yourself on a technical level as well.

Don’t bother slamming the piece as “poorly written”
You may as well just skip that part. Especially if you haven’t heeded the previous tip. But even if your comment meets the aforementioned bar of flawless syntax and dazzling argument, your critique of our writing style really doesn’t matter to us. You’re not our editor or our English teacher, so you can fuck off with condemning our output as poorly written garbage. If you think you can do better, we challenge you to try.

Which brings us to…

Consider doing some writing and trying to get published yourself
I’m willing to bet most people who troll sites have never published a damned word. I said most—I’m sure there are authors who are also assholes who would go after a fellow writer. But most writers know the pain of rejection, the struggle it is to make it into print (even digitally), and the fierce competition for eyeballs on the published work. They’re less likely to lash out at a comrade who has traveled such a long and agonizing path for even the most minor of professional exposure. We suggest you write about something that’s important to you, then get it published (yeah, good luck with that) and see how much you appreciate the trolls coming in and passing judgment on your feelings, with no opportunity for you to reply to their nasty attacks. (Because, please—you’re a troll, and this isn’t a dialog; just vomit up your rude and hateful opinions and never darken the door of that comment thread again.)

I hope with this list to improve the quality of the nasty responses I see on websites. It’s incredibly frustrating for an author to write about something that’s important and personal to them, and have a bunch of people come in and leave asshole comments that are that are rude, conceived from a position of ignorance, and poorly constructed. As a troll you owe it to the author you’re slamming to provide the highest caliber of nasty comment you can. 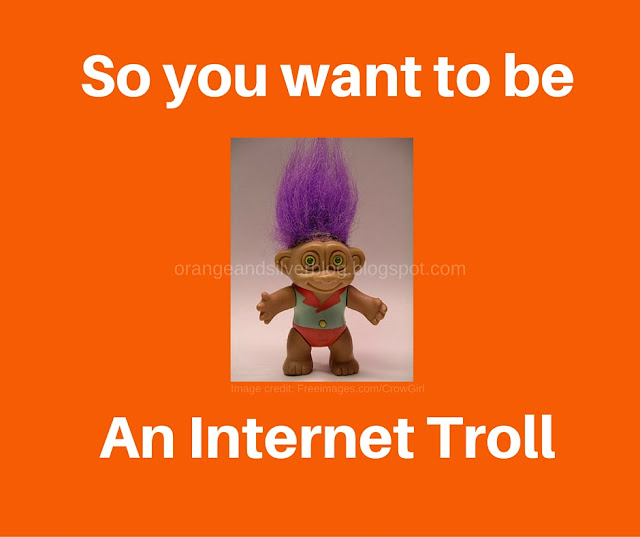 Email ThisBlogThis!Share to TwitterShare to FacebookShare to Pinterest
Labels: how not to be an asshole, how to, trolling

Everyone does, but if they would improve their technique it would be appreciated. Really, troll comments AND they can't spell or punctuate? Intolerable.

Luckily I have had very little experience with trolls. Maybe I have some sort of repellent... or maybe I am opening myself up for all sorts of Troll attacks now! Eek!

Sarah, let's hope not! I've not had any trolls here, but heaven knows I've seen them plenty. Here's hoping you don't see any!

I haven't really had much experience with trolls, but the few times I have seen it, you are correct about the spelling/grammar/punctuation

They always seem to be morons. Maybe that says something about the sort of people who troll, but really, couldn't they make an effort??

Luckily, I haven't experienced this much yet in my corner of the internet. The ones I've noticed elsewhere do indeed seem to have a problem with reading an entire article before posting poorly spelled rebuttals.

Nor have I, thankfully. I get the passion of the moment and all, but really, they need to take a minute to proofread so they don't look like complete fools. They're still going to look like fools, but they would at least look like semi-educated fools.

Yup. Trolls almost always have terrible grammar and can't spell. Unfortunately it looks like you're preaching to the choir here. Maybe you should submit this to The Huffington Post, where they're always lurking under the bridge. On the larger forums commenters will defend the author and then start attacking each other. I try not to read too many of those comments because they make me feel so discouraged about humanity.

You're right, I am (as I knew I would be). Full disclosure I wrote this a couple of months ago and sent it to a couple of outlets, who said, "Well, we get it, but not for us right now, thanks." (See above about how challenging it is to get into print sometimes!) There's an unspoken law in the blog world that you shouldn't read the comments on your own stuff on public sites, because it can be so maddening. Most bloggers follow it up to a degree, but sometimes you just can't help it!

Not that I know anything about the publishing world, but I'm really surprised that this piece wasn't accepted. It's very funny, well written, and totally on point. Plus, it would be ironically meta for the trolls in the comment section. What fools these outlets were not to have jumped on this!

Thanks, Margot! The response was "not right for us right now." That could mean a hundred things, and theoretically I could have hung on to it and sent it in six months later and they might have accepted it. Sometimes it's a crapshoot. I sent one to a site about school dress codes that they rejected, and two weeks later they published a piece about school dress codes. I fumed to some friends in a writer group, and one of them pointed out that they may have had the other post scheduled before I even submitted mine. I was so busy having a tantrum about not having my piece accepted that never even occurred to me, but having been published on a few sites, I know that they schedule content about holidays and annually recurring events two months out, so it totally made sense. As to why they didn't want this piece right then--eh, no telling. But it was handy because I was able to use it for this every-day-in-October insanity that I've inflicted on myself. Everything happens for a reason, I guess! :)

Thanks, Liz! Here's hoping that the trolls will listen, but being trolls, they probably won't :/