New Year's Resolutions for My Children: An Alphabetical List

Although it’s not quite Christmas, many are already engaged in the annual task of making New Year’s Resolutions with an eye toward improving themselves in the coming months. In the spirit of this, I am providing an alphabetical list of possible resolutions for my children. I would encourage them to choose any and all that sound appealing.

Attitude is something I will attempt to control when interacting with my parents. I will not sigh loudly, roll my eyes, or make flip comments when asked to do simple tasks that I know are my responsibility, such as hanging up my jacket.

Brushing my teeth promotes good oral hygiene and saves the rest of the world from exposure to breath that smells like I’ve been snacking on rotten meat with onion and garlic sauce.

Cupcakes, while delicious, are not the only acceptable treat for me to bring in to my classmates for my birthday. I will think outside the box in this regard.

“Doy” is not an acceptable response when my parents tell me something I already know.

“EVER!” is a superlative that I will use with restraint, particularly in negative applications, such as, “You are the WORST MOM EVER!”

Fart noises (either real or imitated), while hilarious to me and my friends, are not generally socially acceptable, particularly in settings such as movie theaters, public transportation, and church.

Garbage is something that belongs in the garbage can. The living room end tables are not garbage cans. I will internalize this fact.

Homework is going to be a feature in my life for the next six to ten years. I will accept this and stop arguing with my parents because they insist I do it.

Independence is something I will earn as I get older. I will stop acting like a four year old because I am not being treated like a sixteen year old, because I am a twelve year old.

Kicking anything inside the house--be it a balloon, a ball, or any other object--has the potential to turn out very badly. I will stop at once.

Lollipops are in fact, overrated. I will admit that my mother was right about this, and stop demanding them every time we find ourselves within a quarter of a mile of our bank.

Minecraft, although fascinating to me, may not be equally as fascinating to those around me. Therefore, I will make an effort to confine my conversations about it to 12 hours per day or fewer.

No is a word I will learn to take for an answer.

Odor of the body is something that is eliminated only with regular use of soap and water. I will put this into practice, and realize deodorant can only do so much.

P is a letter of the alphabet, the sound of which does in fact mimic the slang term for urination. Even still, I will stop giggling every time I hear it.

Quickly is the manner in which I will endeavor to prepare myself for activities that involve a fixed timeline, such as dressing for school.

Reason and logic will serve me better than whining. However, sometimes my requests will still be denied. If so, I will learn to accept the decision gracefully (see above: No).

Socks are either to be removed completely, or worn with shoes over them when wandering around in the yard. Also, they do not belong on the coffee table. I will remember this.

Tantrums are for children much younger than I.

Umbrellas and flashlights really aren’t toys. I will stop destroying umbrellas, and running down the batteries on flashlights, by playing with them. Then the next time it rains, or there is a power failure, my parents will have the tools they need to deal with the situation.

Video games, while enjoyable, are not the only activity available to me. I will find ways to branch out.

Water is an acceptable beverage to consume when I am thirsty. I will stop insisting that soda is “the only thing” that will quench my thirst.

X marks the spot where my dirty clothes go. There is no “X” on the floor of my room.

“Yellow snow” jokes are really only funny the first time they’re made, when one is five. I will stop at once.

Zipping my coat will keep me warmer than not doing so. 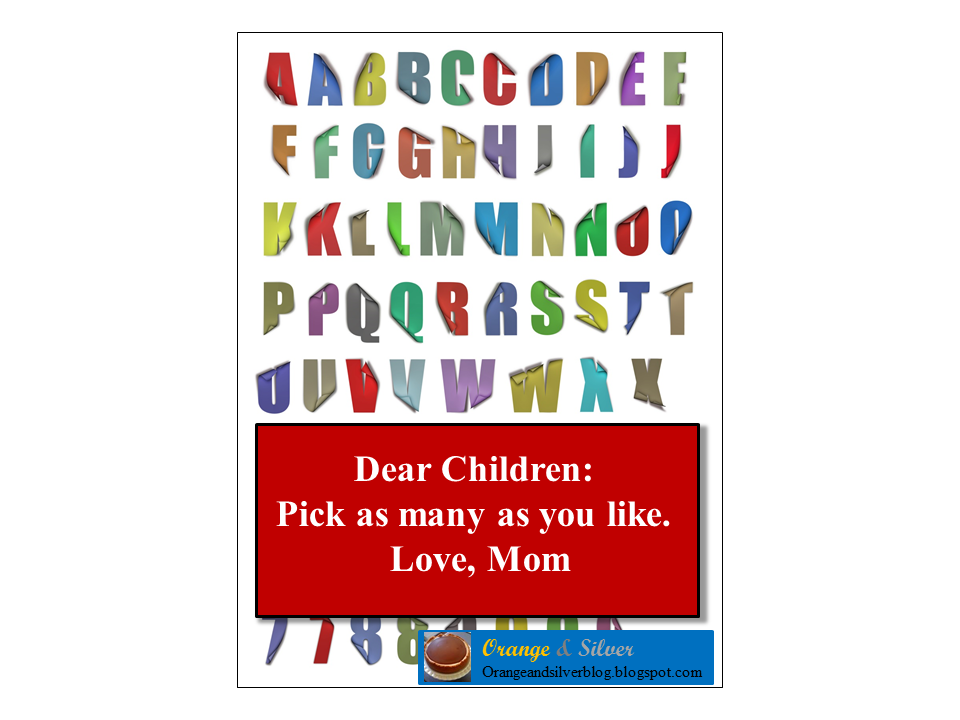 Email ThisBlogThis!Share to TwitterShare to FacebookShare to Pinterest
Labels: alcohol should be mandatory at activities that involve adults supervising children which is to say life, alphabet, new year's resolutions

I will print these out and post them on the inside of my son's door. Maybe make him memorize them and recite them at will.

Word! And today Miles had his dental checkup. There was mucho nasty buildup, prompting the technician to call for a more rigorous brushing regimen. Two full minutes each time. No exceptions. We'll see how this goes...

Cassandra - let me know how it works out for you. I'm fairly confident it will be an utter failure, but I thought I'd give it a shot.

Omg at "“Doy” is not an acceptable response when my parents tell me something I already know." Shared!

Thanks! Yes, my kids have a LOT of areas for improvement. If they just picked one of these, I'd be happy.

Great post! You have taken the words out of my mouth! Do you think I could share that on FB? All the Mums out there should know about that list. :)
Merry Christmas.

I'm glad you enjoyed it--by all means, share! The more the merrier. Let's give every child a chance to make one of these resolutions ;)

Brilliant. I'll adopt all of these on behalf of my kiddos, thank you. Who needs to wait for the New Year?

Thank you! Yes, my kids need every one of these also.

Melissa @One Mother to Another said...

This is motherfreakin hysterical!!! I think "O" is my favorite...I'll need to stow this away for when my kids are tweens that (somehow) smell worst than they do now.

Melissa--glad you liked it! Thanks for reading! They are likely to still smell, just in a different way. More musky/funky than poop. It's a little more bearable in some ways (the smell won't make you physically ill) but not in others (YOU'RE TWELVE. TAKE A DAMNED SHOWER). Gah.

Thank you for reading this at MamaCon - so hilarious! You did a great job!

Thank you, Arlene--I'm so glad you enjoyed it!! It was a big honor to be invited to read, and I'm glad everyone had a good time.