My family has never been much for putting stickers of any kind on our cars. My father loved Ireland, and took four vacations there. He had the smallest escutcheon with “Ireland” across the top, and the colors of the Irish flag along the bottom on the back of an MG he owned when I was a teenager, but that was the extent to which we displayed our political views, hobbies, or passions, on our cars. My parents thought bumper stickers were tacky, and refused to buy them. Other people are not so reluctant, I know.

Because of my parents’ opinions, the need to share personal information via stickers on one’s automobile is one I don’t really understand, and the more personal the information, the stranger it seems. Thoughts that people would hesitate to share at a cocktail party are fair game on the back of a car. Who would say to the face of someone to whom they’ve just been introduced that their pet has a greater level of intelligence than the new acquaintance’s child? Or, “So nice to meet you! By the way, if you don’t like the way I drive, you can dial 1-800-EAT-SHIT.”

Political sentiments are often shared via car. Where I live most of the political bumper stickers are left leaning, or have an environmentalist flavor to them. You’re far more likely to see an Obama sticker hanging out with one that declares, “No Farms No Food” than you are to see someone displaying their support for the NRA. Not that Republicans are nonexistent, just outnumbered. Political bumper stickers seem vaguely passive-aggressive to me. They force you to accept the opinion of the driver without having any means of response, or form of dialog. I guess you could walk up to someone in the parking lot at the dry cleaner and call them on their political beliefs as related via their bumper, if you were that passionate about it.

On the other hand, the content of some aims to be lighthearted and fun, even if it can be confusing. The first time I saw one of those black and white oval stickers with OBX on it, I couldn’t figure out which European country that would be. The original purpose of those labels was to designate the car’s country of origin. Now they tell everyone where you went on vacation, or how far you can run, which is useful information to have about total strangers.

Lots of people let you know how many family members they have by putting stickers on the rear window, each sticker representing one person. This is so helpful, because often in traffic I gaze at the rear window of the car in front of me and think, “I wonder how many people are in their family. How many kids to do they have? I wish there was a way for me to know this.” The most popular ones here are Disney families, but I’ve seen both zombies and Star Wars characters, too. They even have cat and dog stickers you can buy to advertise how many pets you have. Of course then you have the complication of what to do if you lose a pet. I guess you just have to replace it right away to keep the count accurate.

There’s an SUV I often see in the parking lot of my local grocery store that gets very specific in terms of who’s in the vehicle. Each window is labeled with the name of—I assume—the person who most commonly rides in that seat. I’m not sure what the purpose of this is. Is it like an airplane, where each seat is assigned to a person, and if the plane goes down we figure that Mr. Williams was in seat 14B, so the remains in the vicinity of that seat are likely to be his? The names are also very unusual ones, spelled with lots of vowels and drawn out syllables: Aleezeeya and Kayara, and even what I assume are the dogs have their names on their section of the car (either that or they have children named Neemer and Bonzey who are required to ride in what we always called “the way back,” and who probably get teased at school for having really odd names).

The form of car embellishment that seems strangest to me is the “In Memoriam” stickers. These are obviously custom made, and say things like “In Memory of Wilbur Dwayne Hinkley May 12, 1981 – August 7, 2001.” They’re generally stuck on the back window of something like a Chevy Bronco or a Ford Mustang. What I can’t figure out is what part is being dedicated to the deceased person. When something is marked as “in memory of” it’s the inscribed object that’s supposed to be dedicated to that person’s memory, like a park bench, or the Lincoln Memorial. So if the sticker is in the window, is it the car as a whole that’s a memorial, a rolling tribute to the deceased? Is it the rear window? Or is it just the sticker?

Everyone is entitled to their opinion, of course, and some people love to be able to express their thoughts via their bumpers. I suppose it makes them feel that their viewpoint is being respected, or at least recognized. Maybe to express my position I need a bumper sticker that says, “I don't do bumper stickers." 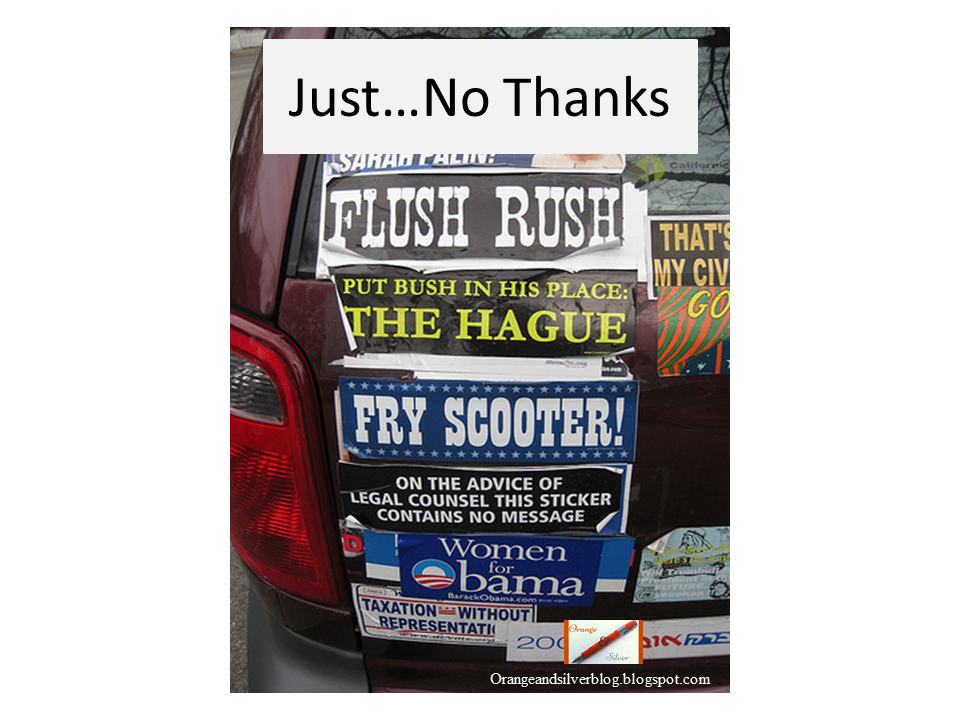 Email ThisBlogThis!Share to TwitterShare to FacebookShare to Pinterest
Labels: bumper stickers, things I don't do

I'm generally with you on the bumper stickers, although I am guilty of putting my kids' schools on my car.

That is funny about the car with the names on the windows. But what about the person who sits in the middle? Do they remain anonymous? Or I guess maybe they just don't have enough kids to require one to have to be in the middle.
I like bumper stickers, but I wouldn't choose any that were overly political or rude. I used to have one that said "I believe in angels." To me it is sort of like wearing a T-shirt... It is kind of fun to express yourself using it... but some people use it to be anonymously rude.

I wonder if they have that person's name on the roof or something :)

I don't really mind them on other people's cars, I just prefer not to put them on mine. They always end up looking ratty and they're so hard to remove.

Oh I love bumper stickers! There have been so many "burst out laughing" moments during my travels to the US. You Americans have such a funny and sometimes whacky sense of humour. Love it.
But that's not something you'd see on cars here in Europe. Sometimes you might see a University sticker, like UCLA or some school in Louisiana (maybe because they have attended summer session there). Or the sticker "baby on board", or A Breizh (Brittany in breton language) or Euskadi (basque community) sticker. One thing you will never see though, is a sticker supporting a political party. Your political, as your religious beliefs belong to your private sphere and are not shared randomly.
I hope there will be more laughs next time I'm behind the wheel in the US. ;)

I'm sure there will be lots--Americans do love a bumper sticker! I know I'm in the minority in not wanting them on my car. :)

I don't have a car but if I did I doubt I'd do these bumper stickers. They do seem weird even the loopy ones. Now do vanity license plates, please!

I have had vanity tags. We don't have them right now, but we have the old ones up on the wall in the garage.