I’m just about to have four tweens, and as I look back at their toddler and preschool years, I think that while they were a bigger challenge in some ways, there were some things that were much easier to manage when they were little.

Tantrums
Toddler tantrum caused by your refusal to let him “ice skate” on the hardwood floor using the potholders as skates. Duration:  three and a half minutes. Ended by distracting him by showing him how he could be Godzilla and knock over block towers.

Tween tantrum caused by your telling him his computer turn is over. Duration: five minutes of him telling you you’re the worst mother ever, followed by an hour and a half of sulking in his room with his ear buds jammed in his ears. Ended by his finally deigning to speak to you to demand that you to drive him to his friend’s house to hang out.

Spelling Things
A friend of ours was taking all four of the kids to the movies, and she wanted to know if she should get them pizza afterwards.  She spelled out the key word when she asked.

“Janey, they can all spell,” I told her.

Gone are the days of negotiating activities or treats via spelling out important concepts in conversation. It was a lot easier to plan when I could spell out the destination without raising hopes. My kids overhear my husband and me talking about going someplace, or possibly doing something, and they immediately spin up with excitement over it. Then as the conversation progresses, if it turns out that in fact the plan won’t work after all, they are disappointed. If I could still spell everything, they wouldn’t know what was happening until I chose to reveal it, and I’d be spared their whining when fun things didn’t work out.

Lies
I know there are mothers who think it’s a crime to lie to their children, and I think they’re missing out on a great coping strategy. When my kids were little, they’d bring me their (loud, obnoxious) battery powered toy saying it had stopped working.

“Oh gosh, “ I’d say, “I think the batteries are dead. Guess we’ll have to wait for Daddy to come home so he can change them!”

When they asked if I could do it, I would say I wasn’t sure where they went, or where the new batteries were. I’m quite sure that they got to a point where they thought I was a total moron because I couldn’t figure out how to change the batteries in  Chicken Dance Elmo, but I really didn’t care. Because by the time Daddy got home, they’d forgotten about said toy, and I’d bought another day of respite from listening to it.

Then came the fateful day that they figured out how to take the battery panel off the toy and change them for themselves. True, by that time they’d outgrown Chicken Dance Elmo, but they’d replaced him with something equally noisy and irritating.

Talking
I may be in the minority here, but I preferred toddler and preschool babble to tween babble. Even though it was hard to really get a coherent story out of them, and it was often endless unanswerable questions, it was adorable and charming. Now it’s about Minecraft and Boom Beach, or a million “what if” questions. The adorable and charming moments still happen, but they’re scattered between lectures about going OP, how much bigger his headquarters can be once he gets to level 11, or what if the world ends tomorrow. I try to care about the video games, really I do, because I understand it’s something they’re passionate about, but it’s hard to concentrate for fifteen minutes at a time. I guess it’s sort of the way they feel when I say things like, “Don’t leave your Go Gurt wrappers all over the couch—they go in the trash can!” So hard to pay attention through the whole thing.

Bathrooms
I admit to being a complete germaphobe. Public restrooms gross me out beyond words, even though I’ve read all the studies about how the pen at the bank is more unsanitary than the toilet seat in the ladies room at the movie theater. Combine this with the fact that my children aren’t what you would call obsessive about washing their hands after they use a public restroom, and I’m over here basting myself with Purell just typing this.

I never had these problems when they were in diapers. Sure, I was wiping their shit covered asses, but at least I knew the level of sanitation of everyone involved. I would far rather change a diaper on a blanket in the back of my car, because I know just how clean (or not) my car is. Public restrooms are a total crap shoot (sorry) and give me the heebie-jeebies.  And when they were in diapers I had some control over when the change occurred. While I didn’t want to leave them in a wet diaper for long, if we had to go an extra ten minutes before we got to a rest area, we could. Now if they have to go, we need to find facilities fast, and of course they’re never synchronized in their needs.

I know better than to tell my friends with small children about any of these things. They would scoff and remind me of the constant chasing, the inability of small children to get their own damned Cheerios, and any number of other disadvantages to having people around who are under three feet tall and have the self-control and maturity level of Sean Penn and Justin Bieber combined and then halved. They would be right, of course, and it’s just nostalgia that makes me think any differently. Although it would be nice to still have children who didn’t roll their eyes every time I opened my mouth. But I guess that’s the price you pay for not having to wipe their asses for them anymore. 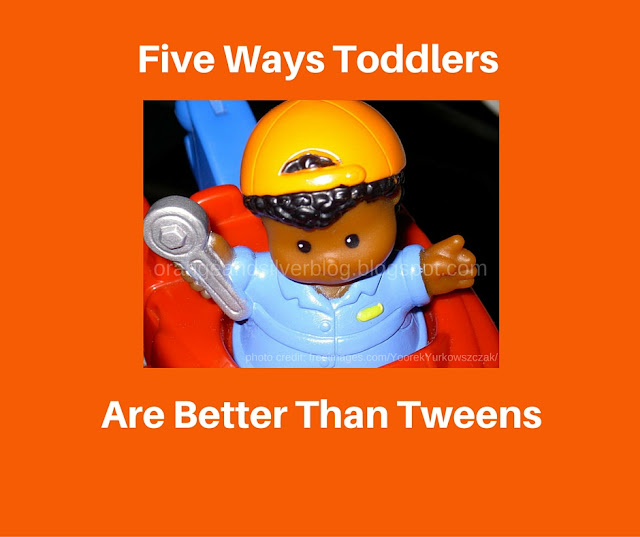 I have one teen and one tween. I do find myself longing for the toddlerhood days but then the little nephews come over and I find myself glad my kids are older (and roll their eyes and talk back and...).