In June I made a Christmas wreath out of my kids’ old toys. (Yes, in June. Shut up. Between homework and holidays there’s no way I can do anything that even remotely resembles a holiday craft after October first.) I bought a wreath form, wide red ribbon, and a tube of pretty strong adhesive at Michael’s and brought it all home. After wrapping the form in ribbon (if you try this, be warned—you will need a longer length of ribbon than you could ever conceive of, and Styrofoam sheds like a motherfucker, so wherever you’re working will end up looking like an outpost of Santaland at the Macy’s in Herald Square) I tripped down to the basement to check out the toy situation.

Like many families, we have relegated old toys to plastic storage boxes in the basement. Once upon a time my super-organized nanny printed out pictures of things like Matchbox cars, toy people, and Mr. Potato Head parts and stuck them on the front of the boxes so my children would know what toys they were supposed to put in the bins, assuming they actually put toys away when they were done playing with them, which HAHAHAHAHAHAHA!! Of course they don’t do that. So now I have all these plastic bins with pictures of what’s supposed to be in them, but what’s really in them is a huge mishmash of plastic toys from the past ten years of accumulating child-related shit.

I dragged three or four of the boxes upstairs with me, and began rooting through them. I found some very big toys to use as anchors, lots of medium and small toys to cover the majority of the surface area, and a bunch of small stuff like marbles and dice to fill the gaps. On the dining room table, I grouped them and started experimenting with positioning. Kids started drifting in, and asked what I was doing. I explained, and continued with my task. As my kids started poking at my piles, I got down to the business of attaching toys to the wreath form. I was interrupted by what sounded like the wail of a wounded wild animal whose favorite toy is about to be glued onto a Christmas wreath for all eternity.

"What? You're gluing that to the wreath? NO! I want to play with that! I want that!"

Um, no, that is a McDonald's Happy Meal toy that has been kicking around in a plastic storage bin in our basement for three years. You don't give a crap about it. You just see it now and think you want it. If I let you keep it, you will play with it for another twelve minutes before you abandon it in the living room, where it will stay for four days until I get sick of stepping over it, and pick it up and put it back in this bin. Then it will be returned to the storage area in the basement, where it will stay until your father goes on one of his quarterly cleaning jags and weeds out a bunch of stuff to sell at a yard sale, and makes up a few bags for Goodwill, which is where this will end up. To save us all time and effort, and contribute to our festive holiday spirit later this year, this is going on the wreath!

I mean, Jesus, AMIRITE? The only thing worse than “OMG I haven’t seen that toy in forever but it’s totally my favorite toy that I ever got and I will die if you get rid of it” is the one where it’s a completely undesirable toy that they have zero interest in until a sibling expresses an interest in it at which point it becomes the best toy ever which they must have or they will simply curl up and blow away from the unbearable devastation of their loss. After all, the best toy to have is a toy that someone else wants, and by preventing them from having it you are inflicting a sadistic and strangely pleasurable form of torture on them. Kids can be such assholes.

I managed to make the wreath without having them absorb any of those toys back into their orbit, although there were a couple that were highly coveted. The remaining toys are back in the basement, never given a second thought once they were out of sight again. Just as I predicted. 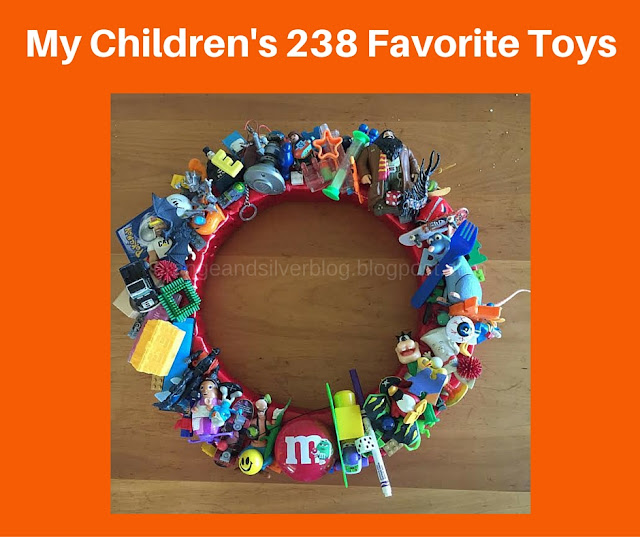 What a cute wreath! I just gotta make one! To steal a line from Michelle over at Rubber Shoes in Hell -- HAHAFUCKINGHAHAHAHA (something like that but you get the gist). Translation, to ensure you I'm not being a bitch -- I always want to do projects like this but I never actually do any. I'm impressed at your ingenious to make the wreath in June. Makes sense to me.

Actually my kids and I went on a "tossing out binge" over the summer so I don't even have any of those pos fast food / vending machine toys left in the house anymore. :-)

I'm not usually big on completion, I'll be honest. The fact that it only took an hour or so over the space of 3 days was the only reason I did! My husband totally eyed the project as one of those that would lie around for months until he finally put everything away. So I know what you mean by HAHAFUCKINGHAHAHAHA because that's usually me!

Sensei, This is what my mother would have called a perfect piece of Whimsy. And she knew about these sorts of things. I love this but what makes me really really love it is the blue mouse/rat holding the fork. Well done.

Jocelyn, Thanks! That rat would be Remy from Ratatouille (he was a Happy Meal toy), and I thought the fork was a nice touch given that fact. You may not be able to see it very well, but at the top, next to the orange star/Play Doh cutter is a dreidel, which I thought gave it a multi-faith feeling. That's my favorite part.