Earlier this year, I was called for jury duty by the county in which I live. In my county there’s website or a phone number where you find out if your jury pool has been called to report. When I wasn’t called by Wednesday, I was pretty sure I was off the hook, as indeed I was. By Thursday I felt like a vestigial organ: the appendix of my county’s judicial system. I don’t know why I was disappointed. I guess it was one of those situations where I didn’t want them to need me, but it’s always nice to feel needed and wanted. Clearly, I was neither in this case.

This feeling was completely irrational, because I’ve served on jury duty twice, and I didn’t really enjoy it either time. I was called once before I had kids, once after (so, twice in an approximately twelve year span, in locations three thousand miles apart). The first time was a trial for the accused rapist of a 12 year old girl. It was pretty awful, and I’ll spare you the really ugly particulars, but the defense claimed that she hated the guy (he was some distant cousin, living with her and her grandmother for the summer), and was doing this to get back at him. SRSLY? My argument during deliberation was that she’d told teachers, counsellors, cops, doctors, detectives, lawyers, in short, probably dozens of people, what happened and she never changed her story. Not any detail. There wasn’t the tiniest bit of variation, no matter how she was questioned, nor by whom. I argued that, when I was twelve years old, I couldn’t have made up a lie and told it over and over, and not had someone catch me somewhere—sequence of events, something that was said or wasn’t said, something. Guilty. Eight years in the clink.

After six years in my new state/county on the other coast, I got summoned again. This time it was a far more comical experience.

As Juror 17, I was called into a courtroom that had last commanded the attention of an interior designer in 1962. It was like a fucking Perry Mason set. Sitting at one table was a young man of probably Central or South American parentage in a short sleeved dress shirt and khakis. Next to him was his lawyer, a guy with perfectly moussed and blown out hair in a $3,000 suit from Nordstrom. 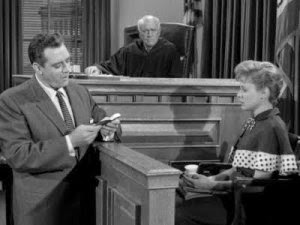 At the other table was an attractive African-American woman in probably her mid-30s wearing a conservative navy blue suit, who was the attorney for the prosecution. Next to her sat a gentleman in Navy dress blues. To this day I have no idea what interest the Navy had in this particular case.

The backstory is this: the young man came to visit here from another state. He had been in town for a weekend, to attend a christening. With him he brought 40+ vials of various controlled substances—Class 1 narcotics. He was staying at a large local hotel, and somehow got busted. While no detailed arguments were presented, of course, it was stated that the defendant had been in a motorcycle accident, and was taking these medications to control the residual pain. Okay.

At the outset of our juror interview sessions, the judge gave us some information. He explained, among other things, that if it seemed that the lawyers were unfriendly, that was not the case. They had been instructed, he said, to stand and face us when we entered and exited the courtroom, but not to exchange any kind of smiles or other emotive expressions, because they weren’t to seem that they were trying to cultivate our sympathies in any way. Facing us meant they had their backs to the judge. As we walked in and out, the defense lawyer was smiling, winking, and generally doing everything the judge had specifically told us he’d instructed them not to do. I began to wonder if, in fact, this guy was not a massive tool.

For the interviews, they asked lots of questions to try to weed out jurors. Do you recognize any of these people? A few recognized the defense attorney, who’s actually a member of the community in which I live. Then there were the, “What do you do for a living?” type questions—are you a judge/lawyer, police officer, drug dealer, you know, the usual. There was a lot of discussion about courtroom procedure and what it means to be a good juror. It took fucking forever because we kept getting kicked out of the courtroom as a jury. Later I found out why.

They asked questions about our personal histories, our experiences. At some point they asked if anyone felt there was a moral or ethical reason they couldn’t sit on the jury. I raised my hand and said I didn’t think I could give an unbiased verdict. A member of my own family, I explained, had been tried on similar charges (true story for another time). The lawyers just nodded, and noted my number. And while that was true up to a point, the real reason I said I couldn’t give an unbiased verdict is because from what little I’d heard, I already thought the guy was guilty.

I’m not saying I’m proud of my thought processes, but here’s what I concluded in a brief time. The guy came here for a weekend trip and brought 40+ bottles of serious drugs? Unless he was anticipating having his left arm amputated without anesthesia during his visit, I can’t really imagine that anyone would need that much smack. While it’s not fair (or even necessarily accurate) to judge anyone’s financial position based on appearances, it didn’t look like this kid was living on the income from his trust fund. I don’t mean he looked like a homeless person, he just appeared to be a young man of modest means. Although I don't know the defense lawyer personally, I knew enough about him to know that he’s not cheap.  I’m also pretty confident there was nothing “pro bono” about this. Sure, there are charity cases, but this lawyer has a reputation (known to me even then) for taking certain types of cases, so he’s unlikely to work for free. So where’s this guy getting the jack to pay for Mr. Fancy Expensive Defense A-Hole? You just have to wonder. Well, I did. Circumstantial evidence, you say? I won't argue, but I can't help what I thought.


Finally after an endless afternoon of marching in and out of the courtroom, the judge explained that some jurors would be released that day, the rest would need to come back the next day to learn their fate. However, before he let us go, he asked if there was anyone who had any reason beyond what we’d already discussed (in the past six hours), why they felt that they would be unable to serve on this jury. A woman in a grey sweater raised her hand, and the judge acknowledged her.

“Your honor, I’m so terribly sorry,” she began, “but I recently suffered a back injury, and sitting here on these hard benches, I’m really only hearing about every third word that’s said. I’m in so much pain I really can’t concentrate.”
I have what at best could be called an inconvenient sense of humor. At worst, I’m just sick.
When I heard this, my first thought was, “I’m bettin’ Homeboy over there could hook you up.”
I DID NOT say this out loud.
You will not be surprised to hear that I was dismissed anyway.
Now, here’s the postscript to this. When the trial finally began, it grew so contentious, and the behavior of the defense attorney so antagonistic toward both the judge and the prosecutor, that the judge ordered Mister Asshole Defense Lawyer to keep his objections to a single word, threatening to fine him $500 every time he failed to do so. He ended up with a $1500 fine, and, ultimately, faced contempt charges.
Because of the atmosphere, the jury was ordered out of the courtroom multiple times during the day (as we were during the selection process). During a forced recess, the bailiff overheard one of the jurors remarking that he’d like to punch the defense attorney. This was “discussing the case outside the courtroom” and resulted in a mistrial. Of course the defendant would be brought to trial again, but when the mistrial was declared, he had stated publicly that he wished he could sack Mr. ADL. So you know it had to be bad.

In case you think I was judging the defense attorney too harshly, I have friends who are lawyers who know him, and have even faced him in a courtroom. My assessment of his client may or may not have been accurate, but it would seem my instincts for asshole detection are well honed. It was confirmed for me that, indeed, this guy is one of the bigger jackasses in a 200 mile radius. If nothing else, it was nice to have my suspicions confirmed.
Posted by Tracy

Interesting! I was totally drawn in. I would love to get selected for jury duty... if it was something interesting. Knowing my history I'd probably get thrown out for anything interesting though-- haha.

It kind of amazes me that a defense attorney would be antagonistic with a judge-- how is that helping anyone? My ex's lawyer was a super biatch.... it didn't help her. HA.

Thanks, Aussa! Glad you enjoyed it. Honestly the rape trial was excruciating because of the poor kid, and I could tell that the other one was going to be a pain in the ass because of the one lawyer. I was glad to be dismissed!

To be honest, he's a complete asshole in general. Like I said, I know plenty of people who know him. I'm not sure how he thought it would help, but apparently it's a tactic that's worked for him in the past. He's been doing this for a long time.

There's one of these kind of attorneys in my community. Super slick, ambulance chaser type, tons of commercials and billboards everywhere. I already thought he was a dick, but when I met an older attorney through work who told me about this *married* guy's outstanding appointment with a prostitute every week, I was like: "...yeah." Case closed. *snrk*

EWWWWWWW. I totally wouldn't put that past this guy, but none of the other lawyers I know has ever said anything about that. Just that he's a total ahole and doesn't have a whole lot of scruples. Which was pretty obvious in my short interaction with him...