In Part One you got to hear about our visit to a super cool Las Vegas museum I recommend, plus an awesome swimming pool experience, and some barfing in the post-Mexican food/roller coaster/heat experience. Now we come to Part Two, where we see a show, go to the pool again, discover another problem with Las Vegas, and do some shopping. Not necessarily in that order. So please keep your arms and legs inside the vehicle as we take off on the rest of our adventure. Again, in chronological order.

We’ve seen probably half a dozen Cirque de Soleil shows over the years (all B.C.—Before Children), so we thought the kids might enjoy a show. I mean, they are cool (the shows, not necessarily the kids, although they’re OK too). We found one where the seats were all the same price and were reasonable (there are some where kid tickets are half price, and some where you pay full price for all the seats, with full price being $125+). The one we went to is called Zarkana, and like all Cirque de Soleil shows, I presume the theme is, “We’re Far More Cerebral Than You, You Unsophisticated Asshole.” 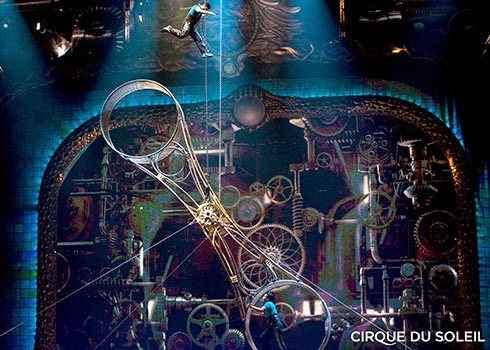 Clearly you are a fucking moron. You paid eighty bucks a ticket for this show and $20 for a beer, right?

Before the show we went to dinner at a Southern-ish restaurant (it’s hard to find a truly Southern restaurant in Nevada, I don’t care how authentic they think their grits are). It was a “two dollar sign” place on Yelp or whatever we used to find it. But here’s something I noticed about a number of the places we went that didn’t offer buffets: they didn’t have children’s menus.

Despite the fact that Vegas seems to be playing down, or at least compartmentalizing, its strip club-hooker-high roller reputation to attract families with kids, in many of the restaurants you’re forced to order food for your kids off the appetizer menu, or get them an eighteen dollar hamburger. One time we picked deep fried macaroni and cheese balls to share (I have an appointment with my cardiologist later this week) and my daughter (who demands macaroni and cheese on restaurant menus) ate them but ended up pretty much eating two tablespoons of Ranch dressing for her meal (taking her to the cardiologist next month). Every restaurant tab was at least two hundred bucks. The sticker shock partially wore off, but it was still a little jarring.

After ordering our kids a $22 bacon cheeseburger, and $15 macaroni and cheese sides off the Southernish menu, we walked to the Cirque de Soleil show. My husband took the kids to get seated while I bought snacks. Dear god the guys who were working the concession were total saints. Everyone was in a hurry and everyone was dithering. If I’d been them, I’d have gotten fired for slapping people for not knowing what they wanted when they stepped up to the counter after waiting in the ten minute line above which the fucking menu was constantly changing on an electronic display. Over and over and over.

I ordered my husband a large Stella Artois (and god bless Las Vegas for being a place you can take your booze with you everywhere, including into the theaters), and three Proseccos for myself (shut up). The guy started pouring Prosecco and asked if I wanted a carrier, since it would be hard for me to transport them otherwise. I said, “Dude, they’re all going to the same place—put them in whatever you want.” Which is why we now have two commemorative plastic Zarkana cups.

My boys loved the show. It was so spectacular, so interesting, and had the great clowns. My daughter slept through almost all of it. This made it a pretty expensive nap, but that’s how it goes, and she’s always nodding off after 8 p.m. so I wasn’t really expecting her to stay awake. What she saw she enjoyed, so that’s fine with me.

We drove back to our hotel and then on…

Know this if you go to Vegas—a lot of people come in on Friday and stay until Sunday afternoon or Monday morning. I presume these are mostly folks from California, but I guess they could be from any of the surrounding states. Either way, by 9:30 on Saturday morning, all the prime spots around the lazy river at Mandalay Bay were filled. We ended up on lounges over by one of the salt water pools in an apparently less desirable section of the resort (there’s still a bar over there, so it was all good to me).

Also, a cold front moved in. This meant that it was only 90 degrees in the heat of the day, instead of 112. However, it actually felt cool while I was in the pool because there was some cloud cover, and I ended up sitting in what little bleak sun there was, while my kids played in the lazy river and the wave pool. I went in a bit too, but really, it felt chilly. I was forced to drink two frozen margaritas while I sat by the pool. I’m a brave little soldier that way.

Saturday afternoon we went shopping. Vegas has its share of shopping, some of it enormously upscale, some of it on the Dollar General level. My kids mostly wanted to check out the M&Ms store, and Hershey’s World. If I had to pick a favorite in terms of merchandise diversity, it would be M&Ms hands down. Mostly what Hershey’s offered was either actual candy, or t-shirts with Hershey’s products logos on them. The M&Ms store had pens and mouse pads and slippers and robes and candy dispenses and stuffed animals and I don’t know what all. They were totally the winner.

We went to another store on the strip that was one of those cheapo souvenir places. I bought a tote bag for five bucks. While we were there, one of my kids noticed a display that was tucked way off to the side that had a series of mugs that had handles that were penises.

My oldest and one twin saw them, and neither of them registered what they were. Maybe because they were out of context, or they weren’t expecting coffee mugs to have male genitalia for handles. They’re a little sheltered. 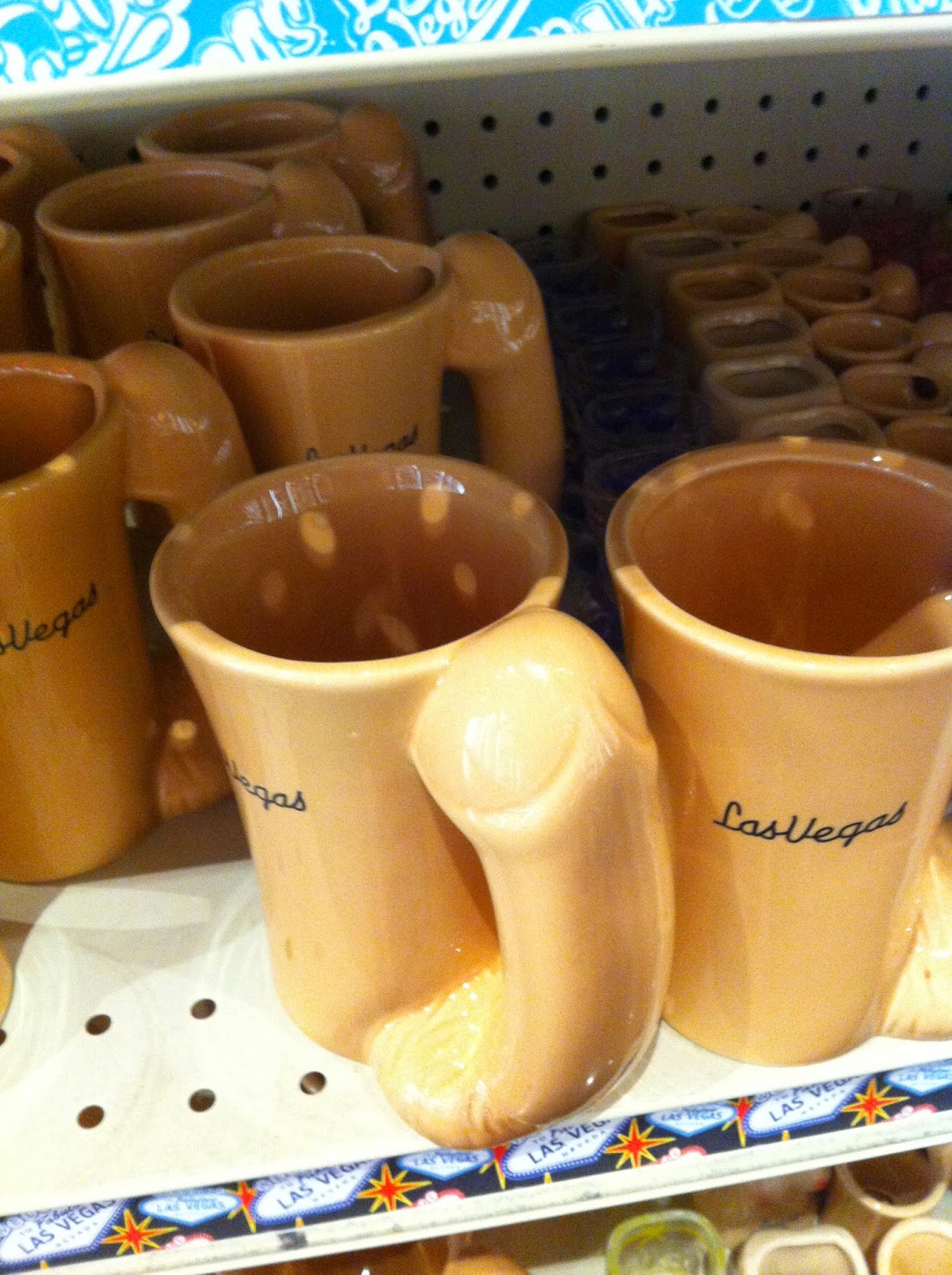 Who wouldn't want to drink their coffee out of this? Besides everyone.

Saturday evening we had dinner with family. My husband’s cousin/godmother (wife of the man who presided at our wedding) lives outside Las Vegas and they met us for dinner.  For as long as we’ve known them, they have been the most frugal people…pretty much ever. She doesn’t cook, so they eat out for every meal, which sounds like it would be pricey, but the places they pick are all either buffets (they do live in Vegas, after all), have early bird specials, or they have buy one get one free coupons.

The place they picked was about 20 minutes away from the Strip, and looked like a very grand funeral home with a pool. They picked it because there was “steak” dinner special, with baked potato and vegetable, for $9.99. The steak was a T-bone, but it was about 1/4” thick. I just had French onion soup, and again, there was no kids menu (WTF?). We were back at our hotel and the kids tucked in by 9, since we were leaving the next morning.

On the way out of our hotel, two of my kids wanted to buy souvenirs. One had been dying for a toy slot machine, and the other found a toy roulette wheel he was taken with. We bought them, and headed off for the airport.

At some point the four of them came up with the idea that when they got home, they would play “Casino.” Up to that point they had on numerous occasions played something they call “Hotel.” They set up a footstool in the first floor hallway (and it sucks when I forget they were playing Hotel the day before, come downstairs in the dark first thing in the morning, and trip and fall ass over teacup on the footstool, but I endure these things for my kids, because that’s the kind of patient, long-suffering mother I am). They have a toy cash register (which is actually a McDonald’s-branded thing with buttons for Happy Meals, Chicken McNuggets, and fries, because we’re all about educational toys in our house) which they use as part of the “front desk.” Then they spend forty minutes yelling about checking in. That’s pretty much how the game goes.

Sometimes they’ll spend an hour arguing about who gets to be in what role. Their hotel has a rather limited service offering, it seems. You can check in, get something to eat (there’s a chef), and you’re fairly safe because there’s security. It should not perhaps surprise me that children who have to be hounded and driven to do their chores don’t think of including housekeeping in their service roster.

So given this history, “Casino” wasn’t such a stretch for them. Of course, one of the twins asked what happened when you “ran out of chips” when you were gambling. They’ve seen the History Channel show “Pawn Stars” so we explained that running out of chips was where the pawn shop might enter the picture. So the kids got the brilliant idea that their casino would have an on site pawn shop. So my children would now not only playing “gambling,” they would be playing, “usurer” as well. Excellent.

I guess it’s a good thing they weren’t more aware of the less wholesome side of Vegas. They don’t know what a “gentleman’s club” is, and they apparently didn’t register that “topless dancers” might be female and would be displaying quite a lot of skin, and make the connection that such a display might be considered inappropriate. I’m not sure how I’d explain to the neighbors that my kids invited theirs to an “exotic dance” club.

Overall it was a good trip. The kids enjoyed the pool, and got plenty in the way of treats, which is their criteria for a good vacation. We made it there and back without the planes crashing, which is my criteria for a good vacation. They’d like to go back to Vegas, because there was plenty we didn’t see, and they actually do have quite a few activities for kids. Next time I’ll just know to steel myself to pay $20 for cheeseburgers every time we eat out.
Posted by Tracy

Email ThisBlogThis!Share to TwitterShare to FacebookShare to Pinterest
Labels: i'm too stupid to get cirque de soleil, no kids menus? WTF?, yes thanks I will have another frozen margarita

I am expecting one of those mugs in the mail tout suite.

I have just installed iStripper, and now I enjoy having the hottest virtual strippers on my taskbar.