You Must Read This

Maybe it’s just our school district—maybe we’re slackers—but I have noticed something that tortured me endlessly in my school days seems to have miraculously faded from popularity. I speak of the dreaded Summer Reading List and accompanying Book Reports.
Maybe it was just the fancy ass private school my parents insisted on sending me to (some drivel about a good education, I don’t know—I actually hadn’t turned down the volume on my Walkman the way I’d been instructed to when they started the conversation), but for years when classes would end in June, they would pass out a list of “Recommended Reading.” Maybe I misunderstood the definition of “recommended” but I was always under the impression that a recommendation wasn’t necessarily a direct order to execute. With a recommendation, you had the option not to participate. That was not the case here. On the first day of school you were to bring back with you some appalling number of reports on books you’d read over the summer. 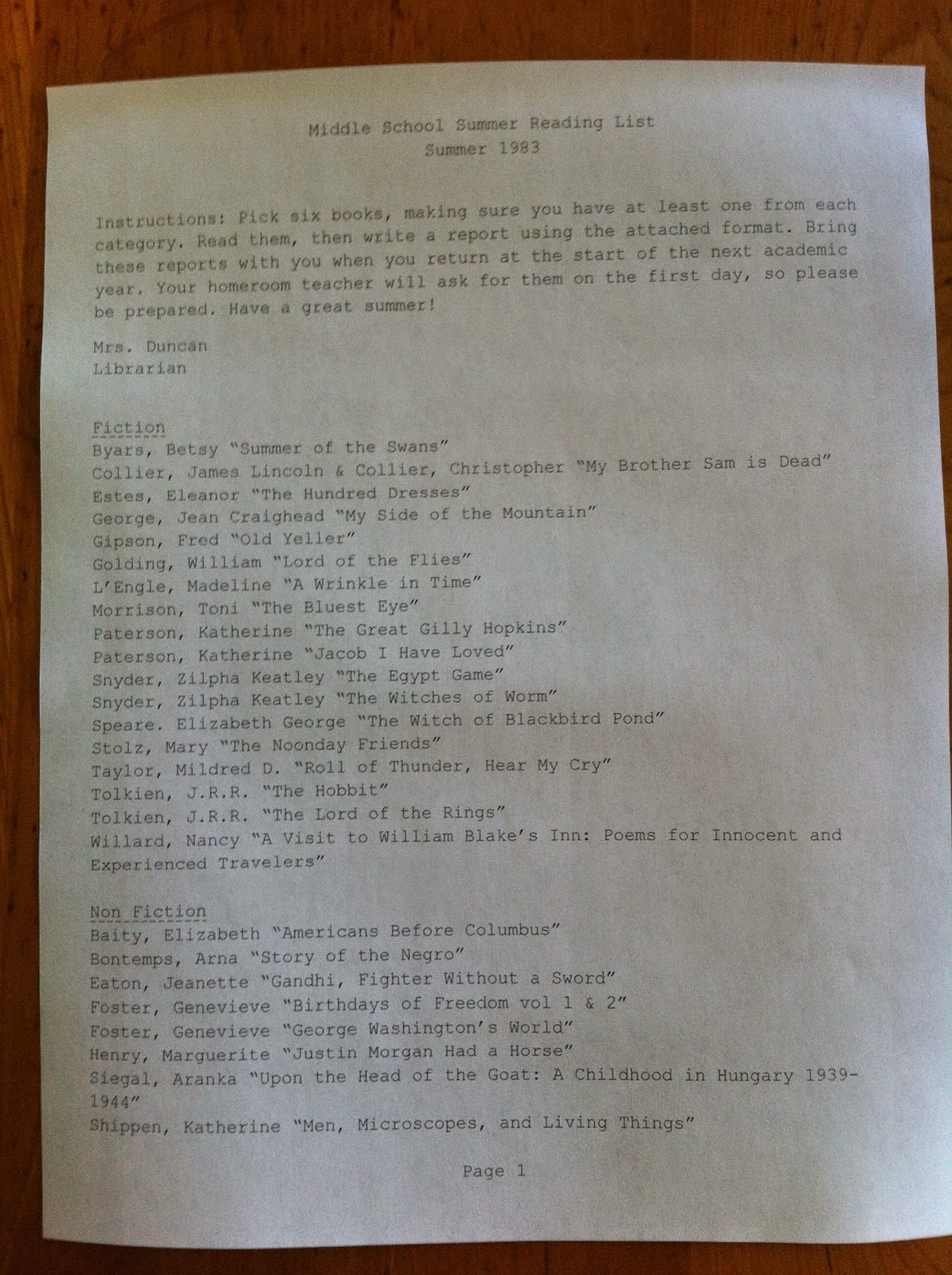 Email ThisBlogThis!Share to TwitterShare to FacebookShare to Pinterest
Labels: Lord of the Flies, nostalgia, things at which I suck, things that suck

Summer Reading is alive and well here. I can't remember whether or not I had summer reading lists; so I'm thinking I didn't. But my son did, and he despised it, despite the fact he loves to read. But, I have to admit, some of the books his school came up with looked so interesting to me that I would read them as soon as he finished them.

I think they've made progress. I did go look at the requirements for my high school, and they've made a LOT of changes that I would have welcomed. Just not having to write the reports would have been an improvement!

My main objection was the book selection list, because of the generally gloomy plots and characters. If they'd said, "Read five books and write reports" with the goal of a) getting you to keep reading over the summer and b) getting you to apply some critical thinking to them, I'd have been OK with it. But Toni Morrison was just the end of my rope. Please pass the Prozac.

I also know that when my kids get to high school, they will be assigned books to read that I'll think, "Oo! I want to read that!" so kind of looking forward to that phase :)

Where the Red Fern Grows made me ugly bawl like a just born baby. I will NEVER read it again, and I hope it is never forced upon my very sensitive son. Good book, too emotional. Don't wanna.

Right? I can't count the number of depressing books my teachers forced me to read. I didn't actually read "Where the Red Fern Grows" but I read plenty of others that were equal downers (including "Bridge to Terabithia"). I spent all of the last two to three weeks of August, and the first part of September, of every school year in a deep funk because of all that shit they made me read.

I'm sorry about your mother. That's awful. Nobody with a heart would make you read a book w/ that kind of association. I agree that a discussion would be much more beneficial to the students. I could see a book report but then they should allow you to write how you actually felt about the book. Even good books have objectionable passages. Somebody (a private school teacher) recommended The Red Fern for my kids. No? It was never on my reading list. See, if you go to public school, you don't read the heavy- weights (or have to do 5,000 reports) but we did have to read Lord of the Flies. I remember liking it, but I bought it as an adult & I have to say nothing happens in the first 100 pages & it's a fairly short book.

Yes, she didn't make me, fortunately. Red Fern is about a kid who trains two coon hunting dogs. Any book that has a dog as one of the main characters is going to be a downer. If you google it, you can read the whole plot on Wikipedia. Based on what I read, I wouldn't recommend it, but to each his own...

Ahh – Nancy Drew! I read every book in the series…and then moved on to the Boxcar Children. I am probably dating myself – but you already knew I was old.

This probably falls into the "Humiliating Confessions" category, but I never read a Nancy Drew until I was *cough*over 35*cough*and now I've read almost all of them*cough*

I didn't like mysteries as a kid, so I didn't read them, but now I love Nancy Drews for their innocence, their soothing formulaic style, their predictability.

If you loved Nancy Drew, let me recommend a book called "Girl Sleuth: Nancy Drew and the Women Who Created Her" by Melanie Rehak, which, if you like Nancy Drew at all, is FASCINATING.