I'm So Over This

You know what’s worse than getting a phone call from a neighbor when you’re on vacation to let you know that his daughter noticed two days ago that yours had lice? Nothing. OK, maybe death or accidental dismemberment, but beyond that, I can’t think of too much. And to answer the obvious question, no, I don’t know why he waited two days to call (I’ll assume the kid didn’t mention it to her dad until then).

We’ve had lice before. We’ve actually had them about five different times. Five bouts of lice times four kids is 20 rounds of treat, comb, repeat. I’m so over the fucking lice that I don’t even know where to start.

I can’t figure out where my kids get them in the first place. I know why they’re prevalent in our community, and if you keep chickens or object to using poison on your kids, please understand that I’m not directing my wrath at you, specifically, but assholes with chickens (because chickens sometimes have lice, you understand, but they don’t bother the fucking chickens. They do, however, bother me and my kids) and those who also shun chemical poisons to kill lice are the reason I have spent what amounts to an entire work week (almost 40 hours by my calculation) over the past three years combing parasites and little tiny bits of parasite shit out of my kids’ hair. I attack these repulsive creatures the way God intended—with hard core poison. None of this tea tree or olive oil shit for me, thank you. It’s better living through chemistry for me all the way.

Where I live, there are many, many people who keep chickens. I have nothing against chickens (they’re delicious, as are their eggs). However, also where I live, there are many people who feel strongly about things like recycling, low carbon footprints, organic everything, and no chemicals. I’m not saying I don’t, I’m just not a fanatic. There’s a guy I know (a very nice guy) who takes his own silverware and napkin everywhere he goes. He eats at regular deli type places, or pizza places, but he doesn’t use plastic forks or paper napkins. For awhile I think he even carried a plate with him.

There are parents in my community who gasp in horror at the idea of their children consuming industrially produced food (such as takeout pizza, or birthday cake from the Safeway). Sometimes they’re the ones with the chickens, sometimes they’re the ones who just shun chemicals, and sometimes they’re both. In either case, I believe that they’re the ones who are perpetuating the lice problem we have. A kid goes out to play with the chickens (and there’s another issue: who plays with a fucking chicken? Get a dog) and his or her head comes in contact with the louse-y bird. Congratulations! Your child now has head lice! Now before they realize it, that kid spreads it to at least one or two other kids. And if the parent is one of these non-chemical types into the bargain, those lice are going to spread further before they can get it under control.

One year the lice problem was so bad that the kids were having to put their jackets and backpacks into individual garbage bags when they arrived at school each day. The bags were then hung on the hooks in the coat room, but they couldn’t touch and therefore spread lice between the contents. It was insane, and it went on until three weeks before school was out. Yes, the lice epidemic was so bad that it lasted from its usual late summer/fall timeframe until May. May. That’s fucking crazy talk.

What’s even more frustrating is that my daughter is the least girly girl to ever have two X chromosomes. She wears her brothers’ hand me downs. She refuses anything pink. She shuns dolls and Polly Pocket (Dear God, while I’m not thrilled with this plague of parasites, or whatever this is I’m dealing with, I want to thank you for not also sending me the Polly Pocket Curse, because I understand that’s pretty hellish as well, and can’t be remedied with a bottle of RID and some upholstery spray. Amen). So I know she’s not sharing brushes or anything like that. Shit, I can’t get her to let me brush her hair, much less have her voluntarily borrow someone else’s brush and do it herself. And my boys don’t wear other people’s hats or anything.

We don’t keep chickens, and I’m clearly pro-chemicals, so how the fuck have my kids gotten lice five times? I can’t answer that, and I’d like to stop thinking about it because every time I do my head starts itching and I think I have lice and freak out.

But I can’t stop because my kids keep getting them.


So we’re going through another round of treatment. I have started treating every three to four days in a two week period—initial, wait three days, treat, wait four days, treat, pray. When we’re combing out in the evenings, we watch The Brady Bunch on DVD. Because if I have to do this shitty job, I’m sure as hell not watching The Fairly Odd Parents, or Sam & Cat or some other asshole show with characters that have voices that would shatter glass and plot lines that are so stupid that they cause me to roll my eyes so far into my head that I can inspect my own frontal lobe. In fact, I’m not sure my kids ever watch The Brady Bunch unless they have lice. I suspect that when they grow up, hearing “Sunshine Day” or seeing Barry Williams will make their heads itch.
To their credit, my kids are pretty patient about all of this. The thing that they really dislike is that they’d prefer to watch their shows, and as I just said, that ain’t happening. They don’t love it, of course, but I don’t hear the same kind of whining that I get with, for instance, tooth brushing or underwear changing. Granted, lice isn’t a daily occurrence (YOU HEAR ME, GOD? PLEASE NO) whereas tooth brushing does have to get done twice a day, and underwear every day (in theory). But then, neither of those things requires them to sit still for an hour while I drag a comb repeatedly through their hair, muttering unkind words about chickens, chemicals, and the jerks who love one and not the other. 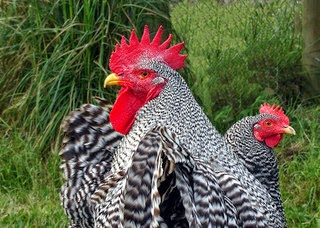 I know these bastards are responsible somehow.


I can’t understand how we can replace organs, travel in space, and  have the ability to watch cat videos for days on end, but we can’t make a product that will kill lice eggs before they hatch. This mystifies me. I’m also not clear how RID and products like it can legally claim to “kill lice and their eggs” when they do nothing of the sort. They kill the lice, sure, but the nits left on the hair are still viable, and hatch and then you have to deal with the whole thing all over again. Saying that they kill the eggs is flat out lying.
The last thing I can’t figure out is what I did in a previous life that was so horrible that karma is punishing me with this repeated outbreak of hellish infestations. The only thing I can figure out is that maybe in a former life I was a louse. This is my payback for being someone else’s scourge in the 1920s or 30s or something. Or maybe I was one of those assholes who refuses to use effective remedies for lice eradication. I suppose it could be payback for that, too. Which if that’s the case, I guess I deserve it.
Photo credit
Posted by Tracy

So much to cover here. First: Oh, NOOOOOOOOOOO! That's awful. Second: We were on vacation last week, too, although I don't know if you were on vacation last week or just sometime recently. Trying to catch up, which I think is pretty much impossible. Third: Both my kids had lice at different times, & w/ my son I was like "How the hell did you get it - you hardly have any hair?" Those lice are sneaky bastards. It's a serious pain in the a$$! If I had to do it 5 times for 4 kids I think I'd kill myself (or the ppl w/ chickens). I didn't know chickens were lice carriers. (My son would probably play w/ a chicken.)

Your daughter is the "least girly girl w/ 2 X chromosomes" - so funny. My daughter doesn't let me brush her hair either (did we talk about this?) I think when she got lice, it was the 1st time I ever brushed her
hair.

If those ppl don't want to use rid, how the hell do they get rid of the lice on their own kids' heads? I used tea tree oil but that shit's expensive, & I think it's only preventative. And I don't LIKE to use chemicals, but if I have to kill some vermin I will.

Love it: "For awhile I think he even carried a plate with him." I'd pay to see that guy walking around town w/ his place setting. I'm pretty environmentally conscience, but what is that going to do really? Did you watch or read the book about the guy - I think he was called Zero-Impact man or something like that? It was interesting, & he seemed nice but I don't like it when ppl get preachy.

Yeah, our vacation was actually two weeks ago (it spanned the end of July and the first couple of days of August). I tend to compress time for my convenience :)

Chickens carry lice. Not a ton--they're not all infested or anything, but most chickens have a couple of lice hanging out on them at any given time.

I have NO CLUE how they get rid of them without the real deal. I don't even want to think about it. It's like one of those questions you have to ask when your kid first goes to someone's house: Do you have guns? Are they locked up? Are you a fanatic about using chemicals, or will you actually TREAT LICE IF YOUR KID GETS THEM??

We did talk about the hair brushing because I remember we commiserated about this. Gah! LET ME BRUSH YOUR HAIR.

Fortunately,the guy with the plate isn't preachy (he's actually a good friend of mine)--he just doesn't like to use paper and plastic stuff in quick service restaurants. My aunt is the same way (which gets a little old, but they're just trying to do the right thing so whatever).

I know. I almost hate writing these because my head itches for a week afterwards.

I honestly don't know which is worse. Having to deal with head lice or having to watch Sam & Cat.