My husband and I have a generally conflict-free relationship. We fight rarely, and when we do, we usually end up laughing. It’s seldom that a dispute will remain unresolved for more than a day. Unless the subject is his goddamned cell phone.


For as long as I’ve known him, and for as long as he’s had a cell phone, he has been horrible about answering his phone. He sets it to silent, and ignores it. This drives me to a state just beyond batshit crazy. Why even have a phone?
A million billion years ago we had Nextel phones. They had that Direct Connect feature, where you could basically use your phone as a walkie-talkie with anyone else who had a similar phone no matter how far away from you they were. It was sort of the audible version of a text message. We used it all the time (as we now use texting), and it was particularly nice while he was traveling. As long as he had the goddamned phone on.
There was one memorable trip to Chicago when I was trying to get in touch with him. With Direct Connect, if my fading memory serves, you would alert someone you wanted to talk to them with some sort of electronic chirp. They could respond or not, but the phone kept a tally of how many times that person had tried to connect with you, similar to the way our current smart phones keep track of how many times someone calls you.
I chirped at him repeatedly with no response. I knew he had his fucking phone, so the fact that he didn’t answer me sent me into the aforementioned state of batshit crazy. I believe I chirped at him 34 times before losing my temper and throwing my phone across the room, where it hit the canvas of an oil painting and made a dent that remains to this day (relax—it was a cheap thing we bought at a charity art auction; it’s not like I hurled my phone at a priceless Renoir or something).
When he finally, finally got around to responding to me, it turned out he’d put his phone in a box of tools and loaded it on the back of a truck where it remained for about two hours before he realized what he’d done.
So cut the guy some slack, you may say. That’s a legitimate reason to not answer you, and you jumped to the conclusion that he was just being a jerk, had a tantrum a four year old would be ashamed of, and damaged a work of art.
Well, in the first place, I would say it was more a work of "art." Also that time it was (semi) legitimate. Every other fucking time it’s been that he just put his phone on vibrate and didn’t realize it was buzzing at him. I’ve asked him about this and it turns out whenever he installs any sort of app that sends push notifications, he opts in to them, which means if his phone is on audible, it’s constantly dinging and chirping sounding, I would assume, like what R2D2 would sound like if he was a particularly chatty drunk.
What a dumb ass.
I went through and opted out of as many of them as I could, but there are still a few that come through, so he still leaves his phone on vibrate 95% of the time, and I still lose my shit about it.
The other night we had this exchange (if you can call it an exchange, when he failed to respond to almost every message sent to him).
Me: "Hey can you stop and get cheese on the way home?"
Him: [no response]
Me: "Hey--we need mozzarella cheese--can you please stop and get some?"
Him: [no response]
Me: "I really need the cheese for dinner--can you PLEASE STOP on your way??"
Him: [no response]
Me: “I NEED CHEESE FOR DINNER. PLEASE GET SOME ON YOUR WAY!!”
Him: [no response]
Me: “Forget it. WHY DO YOU EVEN BOTHER TO HAVE A FUCKING PHONE?!?”
Him: “Words With Friends.”
You can imagine my level of agitation upon receiving this.

It's worth noting that his frickin' job is Customer Loyalty Manager, so he takes calls from customers all day long, some of them on his cell phone. Also? There was an enormous bag of shredded mozzarella in the freezer, so I was able to make dinner after all. But that doesn’t mean I was any more pleased about his failure to respond to me. Asshole. 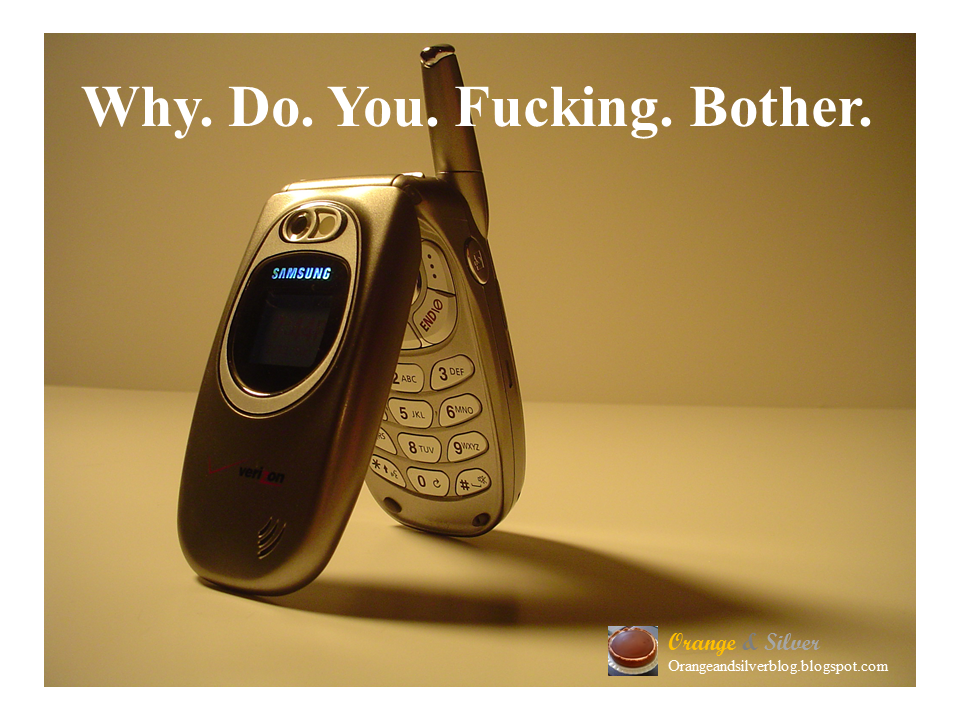 Email ThisBlogThis!Share to TwitterShare to FacebookShare to Pinterest
Labels: things that piss me off, why do you even bother to have a fucking phone?

His answer might not have been funny when he sent it, but it is pretty awesome for giggles now.

With teens, if you get another mother to text the question the other mother will get an immediate response. I'm not above using it to my advantage.

AWESOME strategy, Vanessa! Thank you for sharing. Mine aren't teens and don't have phones yet, but I'm filing this one away for future use!!

Is it ok that my big take away is that you can freeze cheese? (WHO KNEW) Because I did know boys are shit with phones unless it's an update about a sports player. Or they're pooping.

If I've contributed something to your quality of life, that's all that matters! Yes, we freeze shredded mozzarella all the time. I'm not sure I'd freeze block cheese, and you can't freeze fresh mozzarella, but shredded cheese freezes nicely and I just throw it on whatever I'm topping with it (pizza, casserole, lasagna) still frozen and let it thaw in the oven.

My husband does the exact same thing. So frustrating!

I've given up. If I need him I text him on his work phone. That is the only phone that seems to work.

Your pain. I feel it. WHAT IS UP with the not responding?!? Gah.

It's scary to admit this, but I feel I can trust you by now:

I am the asshole when it comes to phones. Yup...WHEN I remember to take my phone with me while I'm out, I'll usually leave it in my purse and then not hear it when it rings. I AM getting better about remembering to check it before I leave a store or when I get back to the car. Although, sometimes if I check it and there's a text saying "I forgot to ask you to get more yogurt," I'll lie and say that I didn't see the text until I got home, b/c I don't feel like going back in the store. Just yesterday, after getting home from the store, I found 6 missed calls from my daughter in the span of 4 minutes. I know, I suck!

I've never been tempted to throw a small electronic (not MY problem :) ), but I once almost threw my brand new $3500 engagement ring in the SF Bay. My husband was separated from his first wife when we got together and she was being a big jerk about signing the divorce papers, which was making it impossible for me to even set a date for my wedding. I said "You had no right to ask me to marry you when you weren't really available," took the ring off and almost chucked it into the water before I came to my senses. (Lest you think I'm a home wrecker, she was the one who cheated on him and wanted to split up!)

If I don't have my phone in my hand, I feel naked. My husband says when we upgrade, he's going to have to have my surgically detached from the current one. (Which, nuh uh because I just put down the old one and pick up the new one).

I have never been tempted to throw jewelry. I admit I've thrown plates, but I am far too bourgeois to throw anything of real value. However, your reason sounds justified. I'm glad you didn't do it, though, because I'm guessing that would have been a deal breaker.

People that don't respond drive me insane. My old roommate used to do that, like I'd ask him to bring something home with him and I'd get no response. Then he'd still come home with it and just say "I got the message, what do I need to respond for?" Then he would have to pry my fingers from around his neck.

And I'm sorry, but the "Words with Friends" response made me fall out of the chair with laughter.

I would want to kill him too. Not sure which is worse--the uncertainty or knowing I'm being ignored.