﻿
­We need to have a serious talk about Pinterest. I love me some Pinterest. It’s an awesome idea that has tangible benefits. I use it in a multitude of ways, some serious, some not so serious. The conversation we need to have isn’t actually about Pinterest, per se, but about Pinterest’s users.
Since their user base is comprised of members of the public, one of course expects it to be as diverse as the public is. Within that spread we find both normal, rational human beings, and another faction that are a little less rational, whom I sometimes think of as “raving fucking lunatics."
Before you judge me too harshly for my opinion of my fellow pinners, allow me to explain.
At some point I noticed a lot of quite wacky shit on Pinterest. Stuff that would clearly never work, or was just downright ludicrous for one (or often, many) reasons. Being the sort of person I am, I created a board to showcase these things, and added my commentary to the images. The board is called, “Presented with Comments.”
I have a modest following on Pinterest. This particular board has perhaps 400 followers. As Pinterest goes, it’s not hugely well known. But lord love a duck, some of the people who repin things from this board are clearly batshit crazy.
Allow me to provide some examples. Let's look at this first. 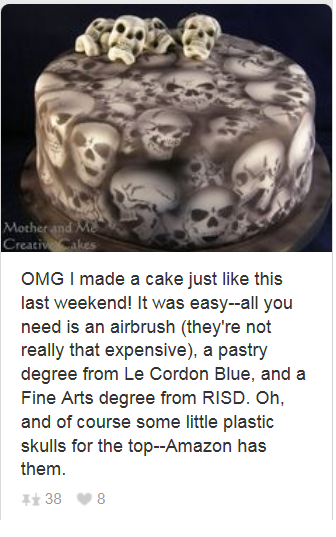 I presume if you’re reading this blog, you grasp that my comments on this picture are provided tongue in cheek. And yet, at last check it had been repinned 48* times from that image, and in a random spot check, I would say that at least 90% of the pinners left my text under it, and pinned it to a board that had a "cake decorating" theme.

Oh so what? Not everyone is as hung up on the copy as you are, you’re probably saying, they care about the picture. Well, fair enough, but the issue I have is what that really means is the people who found the image of that horrid cake and repinned it intact didn’t get the joke. When someone reads something like that and pins it intact and clearly has no clue that my comment was just oozing sarcasm, I regard them with a feeling halfway between pity and disdain. 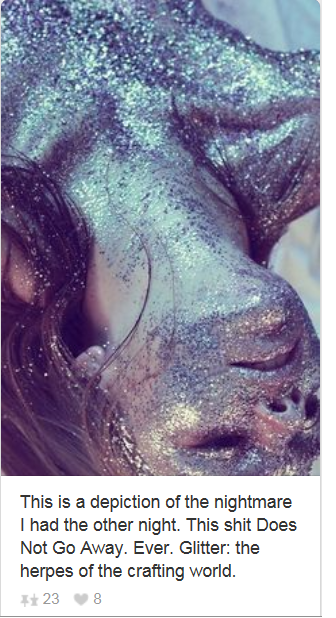 This little gem has gotten a respectable 23 repins. In almost every case, it’s pinned to a board called something like “Glitter All The Things!” or “glitter glitter GLITTER.” Which right away calls into question the taste of the  pinners, because I despise glitter almost as much as glue sticks (no, make that more than glue sticks—glue sticks at least have some worthwhile function on occasion; glitter is forever a useless, irritating asshole), and yet these people are creating boards to honor it. I find that to be just strange, frankly. However, once again, in almost every instance, my text has been transferred intact.

And finally, Exhibit C, as it were. 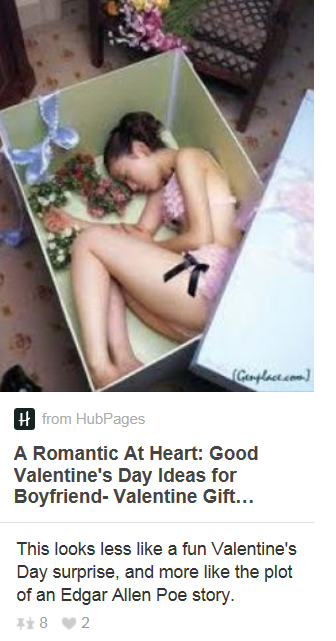 So, just wow, right? Eight people thought enough of this to repin it. Two of them on boards that contain either similarly macabre or similarly amusing images. But that means six people actually think this is a great idea and would be a fun, romantic surprise for their sweetie. This is the sort of thing that makes you say, “What the everloving fuck?” It does me, anyway.

Seeing just how weird some people are based on what they’ll pin off Pinterest adds a new dimension to my already sketchy opinion of a good chunk of the human race. Sometimes I walk down the street and pass people, and wonder if one of them is one of the freaks that thinks curling up in a giant box surrounded by flowers and dressed only in lingerie, looking like something out of porno film called “Done to Death” would be an unusual way to say “I love you!” to that special someone next Valentine’s Day. Because apparently there are at least six people on earth who do.

*I realize in the image above it shows 38 repins. It's been repinned ten more times since I took that screen capture, a couple of weeks ago.
Posted by Tracy

Email ThisBlogThis!Share to TwitterShare to FacebookShare to Pinterest
Labels: but seriously folks, the perils of pinterest, you're kidding right

You win the Internet.

I LOVE this. What great pictures.

And this is why people frighten me.

What the ever living fuck is this!

RIGHT, YOU GUYS?!? Thanks, Sarah. This shit just blows me away. OMG.

People scare the shit out of me.

What about a cake smothered in glitter presented in a coffin? HAPPY BIRTHDAY! (Pinterest is 85% bullshit but the rest is amazing.)

Leslie - I am right there with you!

Brooke - That sounds like a worse nightmare than the glitter covered woman! Gah!

Wow. You are right. You presented the images for humor/disturbification and there exist in this world people who didn't get it. There needs to be a sociological study and our government needs to fund it.

Seriously, the number of people who need humor transplants is huge!

My favorite was the lady who followed me with a ton of Happy God Lady boards and three boards dedicated to Dexter.
Happy God Lady loves Serial Killer. THIS is why Pinterest scares me.

There's a woman I follow (who I think follows me too), who is a super special brand of crazy. She is equal parts terrifying and fascinating. I am unsure if I should love her or fear her. Just her board names alone inspire both. It's a weird world out there on Pinterest.