When we bought our first “big” house (one with more than two bedrooms), it came with an in-ground pool. We couldn’t believe our luck. We could actually afford this? Really? It was true. So we jumped on it, and spent four years with an amazing luxury in our yard.

Yes, it cost us some money—about $300 a year to get someone to open and close it, and each year we had to shell out on average $300 to repair or replace some piece of equipment or other. Ultimately we had to have the pool deck replaced, and the pool resurfaced, but honestly I don’t think if you added up those expenses, plus the cost of the chemicals (which was minimal), it would add up to more than we would have spent on a pool membership, with the club house minimums and dues that involves. Plus it was ours all to ourselves, was open from whenever we wanted to whenever we wanted (not Memorial Day to Labor Day), and available 24x7. The pleasure far outweighed the pain.

There was, however, one experience we had with this pool that a pool membership would have spared us. Drowned chipmunks.

Overhanging the pool deck was a mulberry tree. All spring, summer, and fall, as the mulberries ripened, they fell on the pool deck. They’d sit in the hot sun, and ferment. They’d become boozy, high octane berries. Chipmunks like mulberries and they weigh about 3 ounces each, so they have the alcohol tolerance of a 19 year old sorority girl. They’d eat some berries, and be half in the bag, staggering around the pool deck.

The stages of drunk must be slightly different for chipmunks than for humans. It’s my experience that thirst doesn’t really hit until the alcohol wears off, and it’s part of the hangover stage. Evidently chipmunks get thirsty right away. These stupid chipmunks would lurch over to the pool and try to get a drink of water. The only problem was the level of the water they were trying to drink was about 6 millimeters further down from the lip of the pool edge than the length of the average chipmunk. You probably don’t need me to spell out the result of almost every single one of these attempts.

Another fact about chipmunks is they can’t swim. Squirrels can—one jumped in and went for a dip while I was sitting out there one day, and I chased that little asshole right out. But chipmunks are hopeless and pretty much drop like sinkers as soon as they hit the water. Chipmunks have a lung capacity of about ¼ of a teaspoon, so they also drown almost instantly. We were constantly hauling drowned drunken chipmunks out of our pool.

I hope you’re curious about what we did with the corpses, because you’re going to find out. The house behind us was empty—the people who lived in it moved out about two weeks after we moved in (a coincidence? I don’t know) so the yard was overgrown with ivy and other vines. We would scoop the chipmunks out of the pool with the long handled skimmer, and using it as a sort of catapult, fling them over the fence into all that brush.

Just about the time we were moving out, someone started renovating that house behind us. They started with the house itself, and hadn’t gotten to the yard before we moved to the other side of the country, so I have no idea when they may have discovered the chipmunk mass grave at the far edge of their property, nor what they concluded when they did. I myself would probably have assumed it was some kind of Jonestown/Heaven’s Gate scenario, but with chipmunks. I’m also not sure what the people who bought our house are doing with the drowned chipmunks now since our disposal option is not available to them. Because I’m quite sure those stupid chipmunks are still getting shitfaced on fermented mulberries and drowning in that pool. 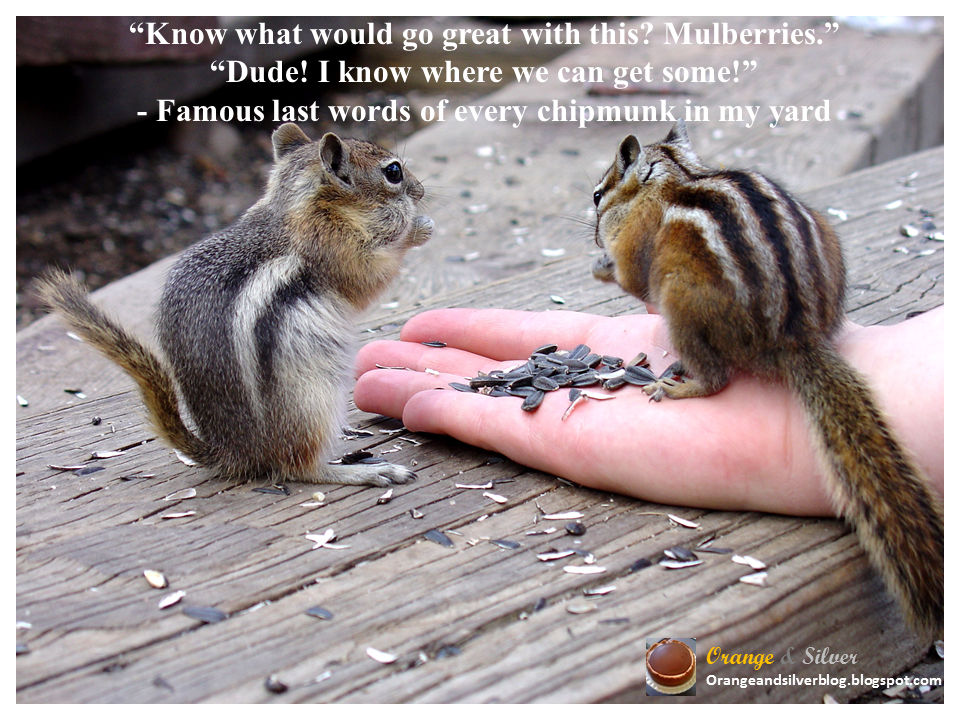 Well, there's every chance that nasty little scavengers picked up the remains and...ah...disposed of them some other way. Although I'm not sure things like raccoons eat carrion, but I'd rather not think about it before breakfast.

We could use a pool bc our chipmunks are total dicks and need to be drowned.

Hahaha, drunk chipmunks!! I love them already. I think I would be sad to drink my own beer on the deck while my little buddies got drunk on berries and died in my pool. I hope the PETA people don't read this. Oh, I may tag them in a Twitter post of this!!! That might be fun.

Let's see....If I were the new owner of the house behind yours I'd think that either there was some sort of Nazi/KKK chipmunk killing brigade running rampant, or that the zombie apocalypse had begun and was going after small animals first. Or that there was a budding psychopath in the neighborhood. And I'm pretty sure I'd sell the house without ever actually occupying it. But I'd also have probably done the same thing if I were in your position. I guess you could have tried setting out bowls of water for them. Did you ever swim in the pool without checking for dead chipmunks first?

I imagine a novelist moving in and writing a screenplay based on those piles of chipmunk corpses.

Shitastrophy - I highly recommend a pool. Both as an asshole chipmunk control mechanism, and for sheer enjoyment.

DRE - Chipmunks apparently don't take kindly to drinking with humans. They only did it when we weren't out there. Occasionally we'd hear the splash as they fell in.

Margot - I suppose we could have done that, but truthfully we probably had half a dozen of these per year. My description makes it sound like it was daily occurrence, but that's not really the case (poetic license ;) ). So I'd have been setting out water to save the lives of six chipmunks. Eh, natural selection. Alcoholism wasn't passed on to future generations. They were pretty visible when they were in there--you'd see them lying on the bottom pretty plainly. No danger of paddling along and all of a sudden putting your foot down on a dead wino chipmunk.

I'm not sure if I'm more amused or horrifies. What I do know is I have all sorts of ideas about what I'd do with a bunch of drunk chipmunks. Like a little beer garden for Octoberfest, complete with lederhosen.

Brooke - we may yet see such a work emerge.

Chris - they were very hard to herd. The problem was, they never gave us any advance notice before they showed up and got tanked. By the time we could have had some fun with them, they were so plastered that they were incapable of doing anything but drowning in our pool. People talk about herding cats, but that's cake compared to wrangling a bunch of sloshed chipmunks.

I want a mulberry tree and I want it now. I don't have a pool, but I'm imagining my yard filled with drunk forest animals and it is strangely appealing.

Without the pool it could be quite amusing. Drunk chipmunks, drunk birds, drunk...other things that eat mulberries. I was thinking bears, but you know, I'm not so sure a drunk bear would be amusing as much as it would be alarming and scary as shit.

Ok, maybe it's wrong but I'm going to burn in hell anyway, but this made me laugh my ass off from beginning to end.

I'll save you a seat if I get there first!

Imagine all the chipmunks there would be in the world if those mulberries and that pool weren't there to thin out their numbers. At their reproductive rates, I'm quite sure we would have chipmunk overlords by now.

Seriously, I looked at it as natural selection. Also, there wasn't a hell of a lot I could do about it, short of cutting down the mulberry tree, filling in the pool, and/or starting a chapter of AA for the chipmunk population (none of which I was particularly inclined to do). Besides, you make a point--can you imagine if we were taken over by chipmunks and they mandated things like all music must be recorded with the "chipmunk sound"? Pharell Williams' "Happy" was hard enough to take 7,493 times at regular speed, much less at Chipmunk speed.