I have four children. The “second child” is twins, and I have a daughter who was born after they were. The three older ones are boys. This is an unusual pattern in our society today. You see lots of parents who have just twins, or parents who have an older child, and twins after, but that’s where it ends. You also see plenty of two- and three-child households. Four, in any configuration, is less common (never mind people who have more than that).

I am an only child, for a multitude of reasons. Growing up, I hated it. I’ve ranted about that before, so I’ll spare you a repeat, but I will say I know far more only children who agree with me than who enjoyed being an only. But that’s a debate for another time. Because of that, I wanted multiple children, which I clearly had. What I find interesting about having four children, some of them twins, is the kinds of things people say to me. I don’t know what makes them think that because we’ve exchanged first names, or sometimes just eye contact, it’s assumed I will welcome their questions or comments on my family circumstances, but evidently some people have fewer boundaries than others.

Here are some things people feel free to ask me or tell me when they learn about my four children, and their genders.

“Finally got your girl, I see.”
Actually fuckwit, I wasn’t “trying” for a girl. I was having a fourth child, and it happened to be a girl. As a matter of fact, given history, I was pretty confident I was having a fourth boy, and I was totally fine with that. My husband was one of two boys. His father was one of two boys. His uncle (my father in law’s brother) had two boys. My husband’s paternal grandfather had a sister, but he was one of something like seven, so the odds were significantly greater that there would be a girl, but the rest were boys. Boys are kind of a thing in my husband’s family. I have a picture taken at a family wedding of all the women in my husband’s family, and there is one woman in it who carried the last name by birth. The rest all married it.

Also? Just because you have a girl doesn’t mean it’s going to be a nonstop festival of My Little Pony, Barbie, and pink glitter all day every day. I’ll admit, I loved the idea of buying that stuff for my daughter, but from a very early age she has scorned dolls, dresses, and anything pink. She has three big brothers. She wants to be like them. She wants to play roller hockey next Spring, and she will. She’s emphatically her own person, and that person has nothing to do with Polly Pocket or Hello Kitty. I can’t tell you how much I admire her. In fact, I have said when I grow up, I want to be my daughter because she knows her own mind, she is unapologetically herself, and fuck what anyone thinks.

“Was she an accident?”
This one actually makes me lividly angry, but I manage not to say what I’m thinking which is, “Why? Were you?” It’s not any of anyone’s business, but I will say here she was not. When my twins were about six or eight months old, I felt like someone was missing from our family. I didn’t know who—I just knew we needed another child. So we had another child.

I’ve had this conversation with friends who are debating having another baby, and I tell them, “If you don’t feel like you’re ‘done,’ you may not be done.” It’s a gut feeling, and one that may not be shared by your spouse. Fortunately in my case, my husband had no fear of four children versus three, so I was able to indulge my gut. Not all women are as successful; I know marriages end over this issue. That’s why I will discuss my daughter’s conception here. If it helps someone to gain some understanding and insight, then it’s worth it.

As a kid I used to say I wanted six children (watched a lot of Brady Bunch, y’all), but when I actually had four, I was good. I love that we’re six, because we’re three and three, or two, two, and two. We take up exactly a full car at Disneyland on any ride. We’re four boys and two girls. We divide up nicely in any of a number of ways.

“Did you have twins because you used fertility drugs?”
How about you tell me about all the medical procedures you’ve undergone in your lifetime, including the personal and embarrassing ones, and I’ll answer that question. I’m especially interested in the details of your last colonoscopy, or pap smear.

Here’s a fact my obstetrician presented me with—if you’re over 35 and you’ve already had one baby, you are four times more likely to conceive twins. You can draw whatever conclusion you like from that information.

“They know what causes that, you know.”
Another one that makes me want to kick the person who delivers it in the stomach. My reflex response (which I haven’t said aloud…YET) is, “What a pity your mom didn’t learn the secret in time.” That may sound rude, but the implied sentiment is that four is too many children. Fuck you—I’ll have as many children as I want, and you get no say in what that number is. This comment usually comes from men a generation older than I am who think they’re being funny. They are not.

“Are you done?”
Since you’re not the other half of the team creating these children, that’s actually none of your goddamned business. I usually respond to this with something coy like, “For the time being,” or “I’ll let you know when I am.” Nosy assholes.

“Are you Catholic?”
Are you serious?

“I don’t know how you do it.”
To be clear, this doesn’t bother me at all. It’s just something people say. Honestly, I don’t know how I do it either. I just do it. I should say how we do it, because my husband is a full partner in this lunacy. Some days I feel like I’m doing a better job than others. There are days I’m convinced I need to learn more about the penal system in this country, in case I need to figure out what one is or is not allowed to bring to prisoners on visiting days. Other days I feel like I should think about what I’ll wear to the Nobel Prize award ceremony (pastels or jewel tones?).

But what I tell people is, “One day I’m going to figure that out, and then I’m going to write a book. When that happens, you have to promise me you’ll buy a copy so I can spend my retirement living in the style to which I would like to become accustomed.”

Please promise me you’ll buy one too? 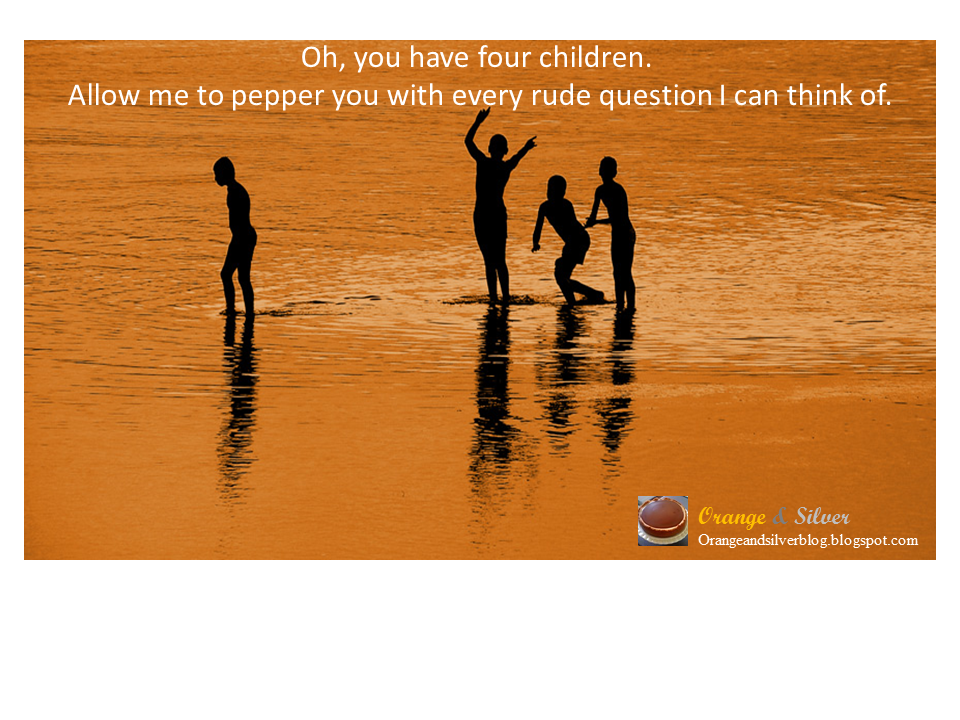 I have no kids-or plans to have kids-so I DON'T know how you do it. However, I am more than willing to piece together some sort of tiara made out of dry macaroni, bobby pins and glitter. (I was an only child. We had to get creative.) By the way, are you done?

Abby - but you'll buy my book, right? ;) I appreciate the tiara offer, and will take you up on that. I can wear it on my book tour. I am never done!

First of all, need to mention that I was also an only child (of course) and hated it as well. It is a very lonely existence.

I have two kids, but they are 8 and a half years apart. This leads to a lot of the sorts of questions that you list here. Not sure why people can't just keep it to themselves.

I'm not clear why they think those questions are OK, but I'm also not sure why it matters to them. Why do they even care? I really don't give a damn about the reproductive habits and decisions of total strangers. Maybe they're just trying to make conversation, but couldn't we just talk about the weather?

"Here’s a fact my obstetrician presented me with—if you’re over 35 and you’ve already had one baby, you are four times more likely to conceive twins."

LOL. Of course there's nothing wrong with twins. I'm just a one and done kind of lady. NO MORE BABIES FOR ME! HOORAY! (I hope my son doesn't hate me for it.)

"The style to which I'd like to become accustomed"--haha. I'm the youngest of two but I think my mom would've have more if she could have. My husband's the youngest of 4 but his sibling are all older so he was kind of an "only." I'm a one and done myself. Z is about all I can handle but I am concerned about her being lonely sometimes.

Sarah, Liz - I didn't hate my mom, I just hated my life. I didn't really blame her, because I understood why (my dad developed Parkinson's disease when I was two, which is just about the time she would have had another). But that didn't make me like it any more. And some people love it--I have met people who were happy as onlies. It just wasn't for me.

When I see people with more than three kids I don't say anything. I just laugh laugh and laugh and think, "haha, stupid bastards. Thank God we only have three." Lol.

I think once you have three, anything over that is the same thing, really. You're outnumbered and are going to lose, so whether that's 3 kids beating you or 10, who cares? Our third wasn't so much an accident as it was an I'm not sure I'm done trying, dear. She was done, but didn't do whatever to make sure she was done, so when I heard her sobbing in the bathroom one morning, I knew we were becoming a family of 5. Good times ever since.

It's true. One you hit three and you're playing zones instead of man on man, it's over for you anyway. We're outnumbered, so they could technically outvote us, but I tell them repeatedly that Daddy and I do not run a democracy. This is a benevolent dictatorship, and don't you forget it. (I know I don't even have to say the forget that almost hourly.)