I’ve mentioned the house we owned with the in-ground pool and the problems we had with drunken pseudo-suicidal chipmunks it attracted, but there was another incident that centered around that pool that’s worth relating.

The pool was put in back in the late 80s, and we moved in right around 1997. It had been in place for probably 15 years when we moved in, which meant that the trees in the yard were 15 years bigger than when the pool was first built. This translated to more shade on the pool, which obviously meant less sun on the water.

You may have noticed that pools at places like country clubs are built on blank expanses that call to mind the Mojave Desert, and are just about as hot. There are good reasons for this. While they don’t want to have to spend any more time skimming leaves and bits of arboreal crap out of the water than necessary, they also want the warming energy from the sun to transfer to the water, to give their heaters a helping hand. Our pool wasn’t heated, and relied entirely on the sun to warm the water.

That was fine back in 1988, but by 2001, the pool got a sliver of sunshine for about 6 hours a day at the height of the summer. The air temperature had an effect on the water temperature as well, and in August, when the daily temperature had been above 90 for more than a week, and the sun had been shining for weeks straight, the water would get to 82 or 83 degrees. This doesn’t sound bad—83 degrees is pretty warm when you’re talking about air—but when you’re talking about water, it’s pretty damned frigid, especially if you’re immersing your whole body in it.

Trees would need to come down, my husband declared. He and his then-business partner insisted they would do it. It would cost $800 per tree to get someone to do it, but they could do it practically for free. They set their sights on the tree that cast the most shade and went to work.

I see no way in which this carefully considered plan could possibly fail.

They bought some rope, took down a section of fence, and got the partner’s big ass truck. They cut a big wedge out of the tree to encourage it to fall in the direction they wanted. Ours was a corner lot next to a dead end street, so they aimed it away from our neighbor on the other side. They tied the rope to the tree, and to the big ass truck, and started to pull. Within a very short time, the rope snapped.

Not to be deterred, they drove down to Home Depot, and got some stronger rope. Which promptly snapped. So they got even stronger rope. Which snapped. They must have done this six times before they finally had to admit defeat, and the business partner headed home. Through all of this, the tree remained stalwart and immobile.

About 8 p.m., after our toddler had been put to bed, while we were sitting in the living room reading, we heard *crack*plop.* I looked up at my husband.

“I think that was the tree,” he said.

“And which way do you think it fell?” I asked.

“I hope in the direction we wanted it to fall,” he replied.

We went out to look. You will not be in the least surprised to learn that the tree had fallen in exactly the opposite direction from the one desired. It had broken through the fence, and crushed the front half of our neighbor’s backyard shed. We played over the wreckage with a flashlight, and considered our options.

Fortunately our neighbor was friendly, nice, and understanding. Also, the shed was a piece of crap that had almost nothing in it, and the one thing in it of any use or value was her lawnmower, which was toward the back, undamaged by the tree. My husband considered filing a homeowner’s insurance claim to repair the fence and replace the shed. I pointed out that, in the first place, our deductible was a thousand dollars or something, and the repairs would probably cost less than that, and that while I was pretty sure homeowner’s insurance covers acts of God and acts of nature, I’m not sure it covers acts of stupidity, which is how I would classify two middle aged suburban boobs trying to pull down an 80 foot locust tree with a rope and a pickup truck.

We ended up buying our neighbor a new shed, which my husband assembled for her after completing the demolition of the crappy one. He also repaired the fence, and cut up the tree. While we didn’t pay for his time, it did take him a whole day to do the shed, and another half a day to do the fence and tree. Between the replacement shed and the materials for the fence, plus his time, the cost of having the tree taken down by a professional probably would have been a wash.

We had two more trees taken down (professionally) in September of that year, and finally got to the point where the water temperature would get to about 88, which is refreshing without being chilling. We never got much of an opportunity to enjoy it, though. The following June we had twins, and in September we put the house on the market and moved to the other side of the country. 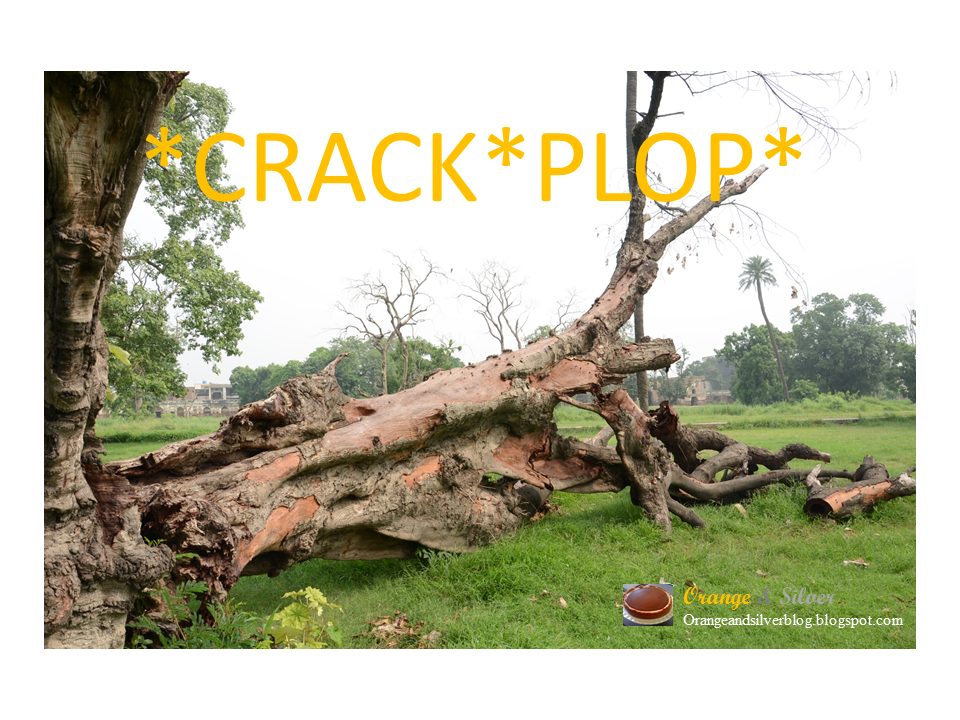 Have you ever had a tree fall in unfortunate circumstances? Has your spouse ever done anything similarly boneheaded? Have you ever done an expensive home improvement with no intention of moving, only to move almost immediately thereafter?﻿
Posted by Tracy

Okay, starting to believe that you are some weird Doppelganger of my own existence. My ex and a friend did exactly the same thing (only they used a chainsaw) with EXACTLY THE SAME RESULTS about five years ago. Thank goodness our neighbors were understanding as well. I awaited the lawsuit for months that fortunately never came. I also confiscated the chainsaw after that.

Oh they used a chainsaw--that's how they cut the wedge out to make it--theoretically--fall the right way. But for whatever reason they decided that a motorized vehicle was a more appropriate tool to finish the job.

Makes me glad we live in an apartment so our adventures in handiness/mistakes happen on a smaller scale!

Yeah, we have a single family house now, but almost no trees around it, and it's practically brand new, so there's very little to do besides maintain it.

This is classic! It's like an I Love Lucy episode, only guys. Or maybe Abbot and Costello take down a tree?

Or Tweedledumb and Tweedledumber. Maybe the Three Stooges without Moe's brains to guide them :)